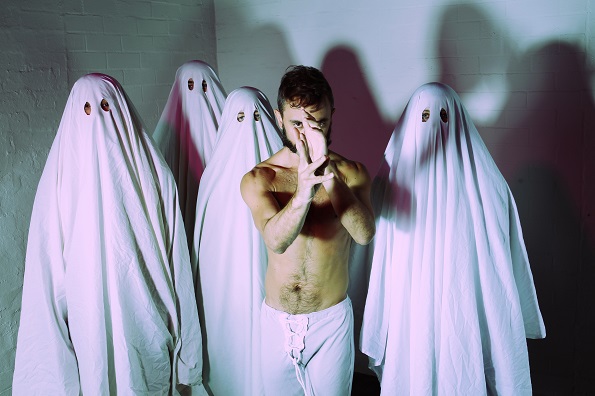 Luke George is one of my favourite local choreographers.  His work is quirky and creative and all kinds of brilliant.

Hailing from Tasmania, Luke has based himself in Melbourne since attending and graduating from the Victorian College of the Arts but he travels throughout Australia, Europe, Asia and North America performing and collaborating.  He has been involved in works by Phillip Adams (Ballet Lab), Gideon Obarzanek (Chunky Move), Stephanie Lake, Miguel Gutierrez and the Powerful People (NYC) and K.J. Holmes (NYC) to name a few.

Following on from the success of NOW NOW NOW comes Not About Face which makes its worldwide debut in Melbourne on October 9. I spoke with Luke in the lead up to this premiere.

You’ve just returned from a significant jaunt overseas with the acclaimed NOW NOW NOW.
Tell us about it.

My collaborators and I toured my work NOW NOW NOW to the Noorderzon Festival in Groningen, The Netherlands and then we took the show to Norway and performed it at the Oktoberdans Festival in Bergen and Sandnes Kulturhus in the Stavangar region. These were my very first tours of my work outside of Australia and my European debut as a choreographer.

We had great receptions in every place we toured to. Dutch and Norwegian audiences seem very interested in what kind of dance and art is being made on the other side of the world. We had full houses and people quite often stayed in the foyer long after the shows to speak with me and the cast (Kristy Ayre and Timothy Harvey) about the show – wanting to share their experiences of the work and ask us questions about our creative process.

Noorderzon is a music and art festival that happens in summertime and all over the university city of Groningen. Punters were out in force seeing shows, concerts, drinking beer and eating pancakes! It was great to perform as part of a festival with such a lively atmosphere and energy which infected the show.

Oktoberdans is a cutting-edge festival of highly experimental new work, all set in the absolutely magical city of Bergen. We took a trip along the fjords… Viking territory! It was so inspiring and confidence-building to be performing my work alongside work by a diverse curation of bold and interesting artists from Europe and across the globe. I got to see a lot of other work and meet many artists, who also got to see my show. These kinds of connections are so important to building a life-long career in dance and art-making. Some of these connections are already blooming into new collaborations!

Touring NOW NOW NOW to Europe has made me really investigate the piece further. I feel that the work and our performances have grown and deepened from the experience. And having audiences from other places and cultures see and respond to the work has given me broader perspectives about what it is and how it could be experienced/interpreted, which in the end helps me be clearer about what I want to make and perform in my work. I also taught workshops for local dancers in each location we toured to.

Luke George’s ‘Not About Face’. Photo by Jeff Busby.

Tell us about your new work Not About Face.

Not About Face is a solo for a performer and their interaction with their audience. In this piece the performer and the audience all wear full body shrouds, basically bed sheets with the eye-holes cut out… some people call them halloween ghost costumes, some call them invisibility cloaks, some call them burkas. I try not to name the shrouds. The point is that we all become anonymous presences and are all in the performance space – there is no seating. The work is about believing, or faking belief, and about what believing has to do with performing. Do I have to believe it to perform it? Do I have to perform it to believe it? And does the audience have to believe it as well? I don’t want to give too much away, but I can say that in this piece I work with ideas that are about the spiritual and the supernatural as material to explore what is perceiving, knowing and believing. And the work is very interactive with its audience; we move, sing, touch, talk, appear, disappear… and so on.

For this piece I have collaborated with artists from different disciplines such as sound, film, visual art, lighting design, theatre and dance. There is only one dancer who performs the work, but I have been collaborating with a dance artist, Hilary Clark, who is based in New York and is a dancer who’s worked with some amazing artists such as choreographer Tere O’Connor and director Young Jean Lee. We met performing together in a work by Miguel Gutierrez and the Powerful People called And lose the name of action, which we’ve been performing and touring in the U.S. (I just got back from performing it in Portland, Oregon). I have been teaching Not About Face to Hilary so I can step out and direct the performing role. It’s quite challenging to direct the piece you’re also performing in. Hilary is an amazing collaborator and has assisted me so much in developing the work. Hilary is coming to to Melbourne to join the whole team of collaborators to realise the finished work. And who knows, she might even perform the work one night….

What inspires and motivates you to create works such as NOW NOW NOW and Not About Face?

Right now in my work I am interested with the interplay between the embodied/instinctual with the cognitive/conceptual. My works NOW NOW NOW, Lifesize and now Not About Face explore ideas about presence, consciousness and the self in relation to how we perceive our bodies and our realities. NOW NOW NOW was about asking the question, ‘can we be in the moment?’, both in life and in the action of performance, and how do we experience ‘nowness’. That piece cracked open for me how electric the live and intimate situation happening between audience and performer really is or could be, and inspired me to investigate and push this further. Not About Face stems from this fascination and in particular about how information and ideas are actually being transmitted between the performer and audience, especially in dance performance where this agreement is unspoken and a kind of tradition. As a performer in other people’s work, I find I am asked to go into deep emotional and physical places that require a total commitment from me for it to be either believable or have strong impact. I am interested in questioning this kind of commitment or believing.

What’s next for Luke George?

As soon as Not About Face finishes I get on a plane and go to Bergen, Norway for a creative development residency with Norwegian artist Heine Avdal and my US collaborator Miguel Gutierrez. In December I return to Melbourne to premiere a new short piece commissioned for Lucy Guerin Inc’s Pieces for Small Spaces season. Then I return to New York to perform NOW NOW NOW at the American Realness Festival, New York’s renowned edgy downtown performance festival. I have performed some of my short pieces in New York before, but this will be my New York debut of my full length work. I am so excited and I am so honoured to be one of the first ‘non-American’ artists to be programmed in the history of American Realness!