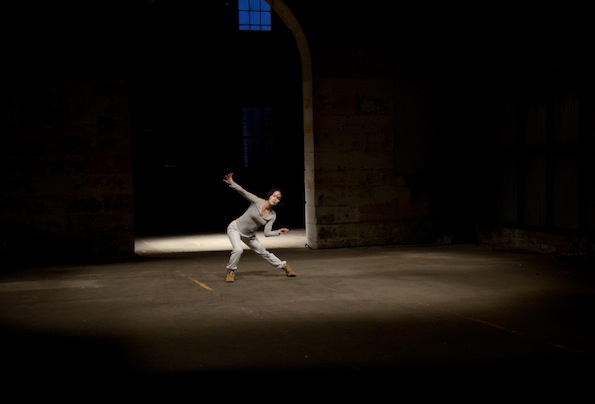 From starring at the Underbelly Festival on Cockatoo Island in August, to wrestling with the impermanence of the body, dancer and choreographer Paula Lay has 10,000 reasons for us to pay attention.

Despite the froth and bubble of television dance-offs and other such divertimento, dance (like all art) is at its best when it digs deep and confronts the truth – like the undeniable fact of death or the even more liberating idea that everything (you and me included) are in process, constantly coming into being and passing immediately out of it. Perhaps there really are 10,000 small deaths every day. Or maybe that’s nowhere near enough.

Whether or not Melbourne-based dancer and choreographer Paula Lay got carried away with this idea, we cannot be sure. All we know is that her latest solo work, 10,000 Small Deaths, was featured at August’s Underbelly Festival, endeavouring to make some kind of sense of time, or more particularly, time passing.

“I’m looking at impermanence,” she declares, “at the transience and immediacy of the body. So it’s a bit of play on all the moments we go through in our day-to-day lives. Working with the body so closely I feel like it’s a present thing but passing in each moment. It’s the idea that there’s a small death kind of happening all the time.”

It’s gritty, reflective and challenging material. Although cloaked in the non-literal loveliness of dance, it tries to scratch places that TV pretends aren’t there (or has a new and improved spray for). “It’s not necessarily spiritual,” Lay notes, “although the questions I’m asking could be read in a spiritual way. But yeah, I guess it is trying to get beneath of a lot of the forgotten stuff that goes on in our lives.”

Again this might seem an odd note amidst the hoopla of Underbelly, a festival that champions the young and emerging and takes over an entire island for 10 days. However, Paula Lay has already enjoyed a deal of positive noise and acclaim. Since graduating from VCA in 2008 she has worked with choreographers like Brooke Stamp, Carlee Mellow and Ros Warby. She was also named one of the “dancers to watch” in 2012.

“It’ll be a really exciting time to be immersed amongst a group of artists; ya’know, everyone’s generating material and there’s this sense of community,” she explained in the lead up to the festival. “The site specific beauty of working on Cockatoo Island will be great. It’s a fantastic location.”

As part of her performance of 10,000 Small Deaths at Underbelly, Lay also danced with (and not just by) herself. In other words, she was working with both live and pre-recorded video. Whilst this is hardly new, her take on it ties in beautifully with the overarching thematics. “I’m working quite specifically with the idea of having a particular frame that I’m shifting in and out of; but also with establishing certain viewpoints that you might not get with the naked eye. I’m interested in the live-ness of the body but I’m also interested in what happens when we go into a screen space. So the boundaries of what’s imagined and what’s real start to slip around a bit.”

In some sense the video also encapsulates the dilemma of the performer and director; namely, how to be completely present in the dance but remain outside just enough to retain some semblance of perspective. “You start to have bit of an objective/subjective view of yourself,” Lay reveals. “You start being inside and outside … Part of my development as a choreographer has been being able to track what I’m doing whilst also staying on the inside. I’m also learning about time and place; about when to slip into performance or director mode.”

For a solo work like 10,000 Small Deaths, this juxtaposition is amplified further. According to Lay, “In the context of solo performance there is this opportunity to draw people into intimate, small details and kind of take them to where my focus is. They might be moved in some way but hopefully it will just help them to engage in their own ideas about the body or time passing or how impermanent things are.”

However, for all its Buddhist overtones, Paul Lay insists that her work is not driven by ideas. For her, the immediacy and frailty of the body is the spark of dance. “I definitely don’t approach work thinking too thematically; it definitely comes through the body,” she says simply. “But I also think that working with body is so well fitted to these themes because the body is so transient and constantly changing. You’re sort of inadvertently always dealing with death whenever you’re working with the body.”

In that context, Lay was probably scarcely daunted by working with a 100 of Australia’s next generation artists on the creative microcosm of Sydney’s iconic Cockatoo Island as part of one of the nation’s premier showcase events for ‘emerging’ talent. But then again, 10,000 Small Deaths is a solo work; meaning nowhere to hide.

“It’s quite revealing,” Lay confesses. “It’s a vulnerable place to be in. But that’s where the potential is for it to be quite interesting.”