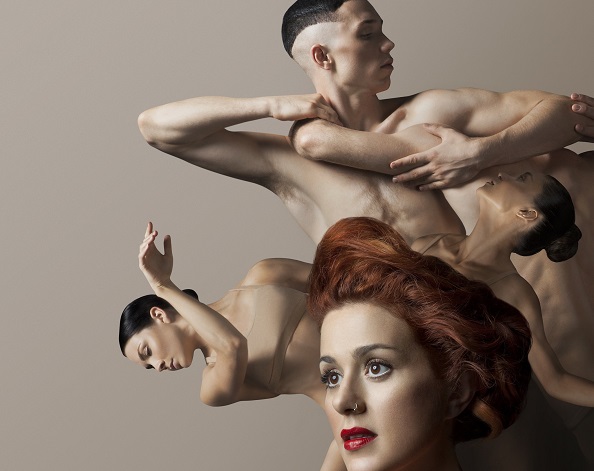 Les Illuminations, choreographed by Sydney Dance Company’s Rafael Bonachela, explores different shades of light exposed and concealed in the realm of relationships and love. Purposely created in a contained theatre at Sydney Opera House, with the stage designed as a fashion runway, the audience consequently was invited into the intimate space of choreography, music and vocals.

Drawing inspiration from the masters of music and poetry, Benjamin Britten and Arthur Rimbaud, both musical scores and poetical imagery came to life through emotive form, accompanied by exquisite vocals performed by Katie Noonan.

The opening piece composed by Britten, Simple Symphony (Op.4 1933 – 1934) commenced with the notion of lightness and innocence found in the oblivion of young love and its weightlessness in contrast to the laden world. The opening duo melded seamlessly into each other, lifting, leaning and landing from one movement to the next. Scores such as Boisterous Bourée and Playful Pizzicato underpinned the unburdened sentiment. The connection between the dancers eye line certainly captured the expression of innocent and untainted love through Bonachela’s signature style.

Part two of Les Illuminations (Op.18 1939) delved into the darker and grainer corners of the work, with inspiration derived from Rimbaud’s poetry, which focused upon the coldness and mystification experienced in large cities and the pining, lust and infidelity found across multiple dimensions within relationships.

Costumes by Toni Maticevski added textural components inducing ones consciousness to human vulnerability and despondent tendencies. The choice of black leotards with angular mesh panels were suggestive and harsh yet elegant. These emotional dynamics were progressively evident in choreography particularly in the duo performed by Charmene Yap and Cass Mortimer Eipper. The seduction and denial infused by a push, pull qualitative notion reflected the harshness found in darker corners of love and was enhanced by Noonan’s haunting and evocative tones.

This stylistic and eloquent work, once again demonstrated Bonachela’s unique ability to deliberately combine the precise amount of artistic collaboration.