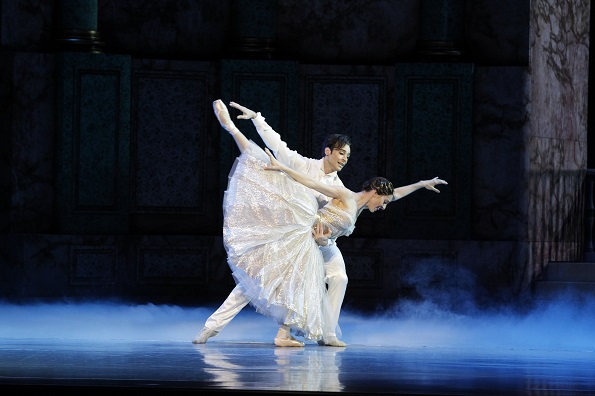 Choreographed on the company by highly sought-after Russian Alexei Ratmanksy to the wonderful music of Sergei Prokofiev, The Australian Ballet’s brand new production of Cinderella is undoubtedly a success.

The design is breathtaking throughout. Jerome Kaplan’s surrealism-inspired sets and costumes are wonderfully realised, and a really help to drive the drama of the story, along with lighting by Rachel Burke and projections by Wendall K. Harrington.

Ratmanksy has remained true to the traditional, beloved storyline, adding personal flourishes in character and plot. The Stepsisters, for example, are known as Dumpy and Skinny as opposed to Ugly. The Fairy Godmother, in a bowler hat, fake nose and long grey coat, is a far cry from the well-known image of a sparkly tiara-wearing apparition. There is no pumpkin coach and no mischief of mice; instead there is a glorious solar system, complete with the planets, sun, moon and stars.

I was lucky enough to see Madeleine Eastoe as the title character. She performed the absolute marathon of a role unfalteringly, carrying us through the highs and lows of the story with flawless technique and wide-eyed, vulnerable beauty. Kevin Jackson was a fine match as the Prince; strong, graceful and commanding. And of course, the audience loved the riotous Stepmother and two Stepsisters, danced at a ferocious velocity by Dana Stephensen, Robyn Hendricks and Reiko Hombo.

Ratmansky is a master of manipulating the classical vocabulary to speak with a whole new language. His choreography is layered with depth and detail. In some sections, particularly the solar system in Act 1, I found there were almost too many ideas fighting to be heard at once. Overall, however, this intricacy, along with ingenious design and magnificent performances, resulted in a powerful sensory experience. Ratmansky certainly asks a lot of his dancers but, as expected, The Australian Ballet deliver. And then some.