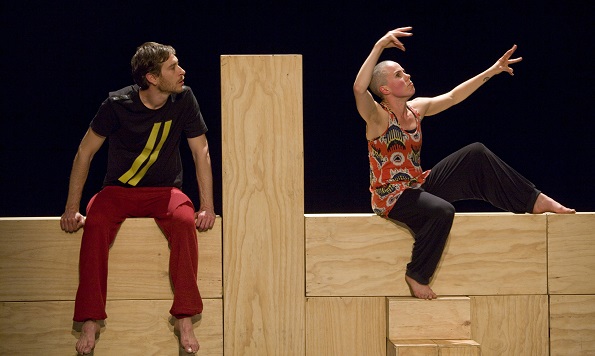 DoubleThink, described as “a playful investigation into opposition,” was partnered with the light-hearted miniature, Gogglebox, which was nominated for a Green Room Award for “Best Original Choreography” in 2005. Here Byron speaks to Dance Informa about the inspirations behind these two very different works.

The term “doublethink” has an interesting history. It was first coined by George Orwell in his dystopian novel, Nineteen Eighty-Four. How does your show explore the idea of “doublethink”?

“I’m interested in the condition described by the term “doublethink.” This notion of a mind being able to hold and act on contradictory beliefs is not something that is specific to the novel Nineteen Eighty-Four. I wonder sometimes whether this condition will become necessary for all of us as our lives become more complex, and our ideologies and needs become more disconnected. I guess I see the entire work as being about the individual engaging in one long, amplified moment of doublethink.”

“I aim to allow the dance to express more than a mapping of movement to meaning and therefore, the scenes in this work do not combine in a linear sense to create a story. The notion that a five-minute section, or even an hour of movement, can explore a single moment is something that I think dance does well. It is its strength and in my opinion, when dance is at its best.”

“I was reading an article about the illusion of opposition, how essentially opposites are more alike than they are different. It discussed how opposites are just points on a spectrum. The distance between those points in relation to the entire spectrum is subjective, based on how much of it you are able to perceive. This article in turn got me thinking about dichotomous thoughts, perception and the way we understand duality.”

“I have always had an interest in science and its similarities with the arts, particularly from a research and theoretical point of view. I was reading about quantum states and the almost magical properties that subatomic particles seem to take on when you reach that threshold. Things like superposition, Heisenberg’s Uncertainty Principle and the wave/particle function of light — all of these things seemed to be expressions of this ability for matter to exist in different states or simultaneously across a spectrum.”

“We explored it all through the performers’ bodies and in the set, lighting and auditory elements of the work.”

How have your feelings about the work evolved since its debut?

“I think for the first season in the Melbourne Festival we really only just ‘got there’ in time for opening, so it felt a little rough and ready. It was so nice to have a week to rehearse and rework some things for this tour. The work still feels surprising and unfamiliar to me when I’m watching it; it doesn’t feel like many other dance works I’ve seen, which I like.”

Tell us a little about the other, lighter work to be featured in your double bill –Gogglebox?

“Gogglebox was created over the course of one week and was performed as part of the inaugural Pieces for Small Spaces by Lucy Guerin Inc. in 2005. I was deciding on a short work to present alongside Double Think and happened to read an article stating that this year would mark the end of analogue television. I remembered this piece of mine presented in the style of an animated short and is, essentially, a humorous look at our relationship with the humble old TV. This work is movement as pure entertainment. It’s character-based and cartoonish. It’s just for fun.”

What is your own relationship with the television?

“I watched a lot of television when I was young though, probably too much, as I now sometimes find myself trawling YouTube like a nostalgia junkie for 80s television commercials and jingles. We used to be at the mercy of the programmers and eat up whatever morsel they decided to drip-feed us, although that did make the shows seem like some incredibly special gift.”

“I guess the way I engage with television programs now is to pick a show, download an entire series and watch it like a 12-part movie on my laptop. My TV lays dormant waiting for me to give it some love once a month when I decide to watch one of my old DVDs.”

What is next on the horizon for you and team at Force Majeure?

“I have had a long relationship with Force Majeure as I have been performing and collaborating with them since the company was founded. It has been amazing to be a part of such an influential company and watch it grow into the flagship physical theatre company it is today.”

“Kate [Champion] has been a sort of unofficial mentor to me for many years now and for the last year or two they have supported me by producing my independent work. Over the last few months since my appointment as Associate Director, I have essentially been taking a little of the pressure off Kate in terms of some of the office stuff, while she is busy working on some other projects.”

“I hope to continue to work with Force Majeure in the future and aim to match the company’s belief in me with the strongest and sincerest commitment to my work and by absorbing as much from this experience as I possibly can.”