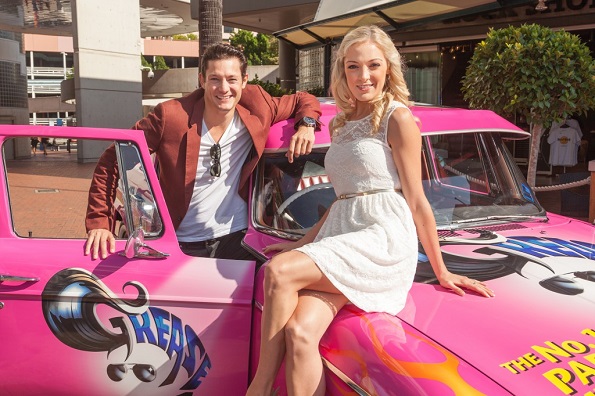 On Sunday 25 August, I saw Brisbane be the first to take a spin in the million dollar production of the famed 50s-themed story, Grease. Kicking off at the Lyric Theatre, the audience was treated to a song and dance sensation that hit all the right notes.

The iconic roles of Danny and Sandy, played by musical theatre favourite Rob Mills and rising star Gretel Scarlett, were admirable. While Rob made the role his own, giving a unique twist to the character, Gretel took a more traditional route and stayed close to, how we as the audience, remember Sandy.

All of the T-birds and Pink Ladies gave a solid performance, however credit must be given to Stephen Mahy and Lucy Maunder in the roles of slick Kenickie and feisty Rizzo. Both gave depth to the characters and took us on a separate journey from the Danny and Sandy love story.

Costumes were, as you would imagine, reminiscent of the film and era, with leather, jersey-style cardies and flirty dresses. The hair and makeup artists did a phenomenal job in transforming each performer into their on-stage persona. Some were even unrecognisable in their before and after shots!

The singing and dancing were more of a spectacle than the set design and layout. Staying true to form, the diner, school yard and dance hall were as you would remember from the movie. An unexpected turn saw Sandy’s transformation being played out in the diner as opposed to the grounds of Rydell High. This gave the ending its own flavour.

Casting was right on the mark when it came to choosing cameos. TV and radio veteran Bert Newton was perfect in the role of disc jockey Vince Fontaine.

Anthony Callea may be small in stature, yet his energy and boundless enthusiasm for the role took over the stage. Singing a classic Grease tune in the role of Johnny Casino, it added a pleasant diversion to the rest of the production.

Popular TV personality Todd McKenney was a highlight of the show in the role of Teen Angel – he even made light of his career as a judge on Dancing With The Stars and his days as a performer in the Peter Allen musical. ‘Accidentally’ breaking out into a Boy from Oz melody, saw the audience erupt with laughter.

Choreography was fantastic. Each routine was fast paced with energy levels high. It wasn’t ground-breaking choreography, but definitely had you tapping your feet and bopping away. Put simply, Grease was the word on everyone’s lips!

For tickets to the number one party musical, visit Greaseistheword.com.au.