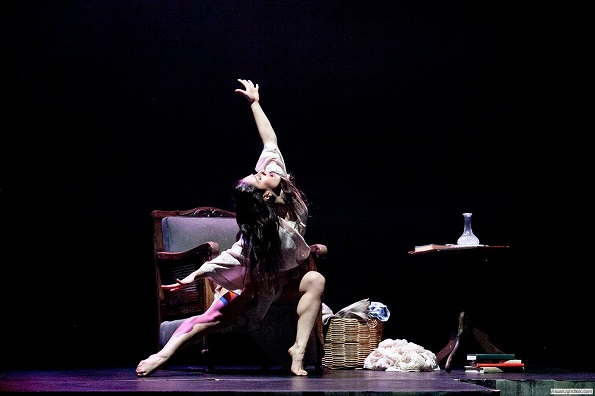 Collaboration The Project has been putting on dance shows and events for a number of years now under the guidance of Melbourne dance royalty Paul Malek and Kim Adam.  By virtue of its name, the company has produced contemporary works of a collaborative nature.  They have generally been modern, urban dance pieces that were very now.  Then along comes Yours Truly, a period piece set entirely to the music of Antony and the Johnsons which tells the story of lovers torn apart by war during the 1940s.

‘Yours Truly’ by Collaboration The Project. Photos by Belinda Strodder.

In the lead up to opening night, the Melbourne dance scene was abuzz with the rumour that this would be Paul Malek’s last outing with Collaboration.  After seeing Yours Truly, I am relieved to learn that this is simply Malek’s last show in his current role with the company.  Stay tuned in that regard…

Yours Truly was sublime.  From the softly lit stage and the haunting and emotive music to the superbly danced choreography and the heartbreaking story, this was local dance at its finest.

The piece centred around three couples, with the men fighting a war on foreign land while the women waited at home and fretted about their partner’s return.  The choreography was dramatic when it needed to be and subtle when required.  The true genius of this piece was the casting though.  Each dancer brought to the stage not only strong technique that was a joy to watch but also maturity and emotion that told the heart wrenching story without a trace of triteness or insincerity.

Special mention must be made to couple Jayden Hicks and Lauree Malek.  They both shone like flawless diamonds on stage and left me with tears in my eyes.  Definitely two of Australia’s rising stars in contemporary dance.  I only wish the piece featured them both more.

Yours Truly is what superlatives were made for.