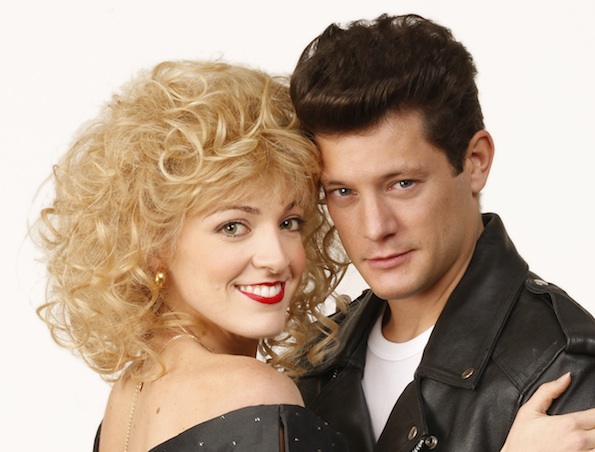 Packed with explosive energy and performed by an all-star cast, GREASE returns to Sydney, Melbourne and Brisbane in a live production that’s truly ELECTRIFYIN’! So get ready to dust off your leather jackets, pull on your bobby-socks and take a trip to the 1950s as “bad boy” Danny and “the girl next door” Sandy fall in love all over again!

GREASE is a party musical, featuring all the unforgettable songs from the hit movie including You’re The One That I Want, Grease Is The Word, Summer Nights, Hopelessly Devoted To You, Sandy, Greased Lightnin’ and many more. In the United States, GREASE is the No. 1 highest-grossing musical, to date!

John Frost’s new multi-million dollar production of GREASE will open at Brisbane’s Lyric Theatre on August 20, with seasons at the Sydney Lyric Theatre from October 13, and at Her Majesty’s Theatre, Melbourne from January 2, 2014.

In the lead roles of Danny and Sandy are musical theatre favourite Rob Mills and rising star Gretel Scarlett. Rob Mills made a name for himself in musical theatre performing Fiyero in the Broadway blockbuster Wicked in Melbourne and Sydney for two years, and will join GREASE after starring as Warner Huntington III in the hit musical Legally Blonde in Brisbane and Melbourne.

Gretel Scarlett has played support roles in Wicked and Mamma Mia! and is excited to take on her first starring role.

Bert Newton returns to his radio roots to play the role of slick veteran disc jockey Vince Fontaine, while Todd McKenney dusts off his dancing shoes to star as Teen Angel, the good-looking, falsetto-voiced, Fabian lookalike. The role of All-American, rock-star student at Rydell High, Johnny Casino, has gone to Anthony Callea, returning to the musical theatre stage after success in Rent and Wicked. Rizzo, the leader of the Pink Ladies, will be played by Lucy Maunder (Dr Zhivago, The Threepenny Opera), and Kenickie will be played by Stephen Mahy (Jersey Boys, I Will Survive). The cast also includes Francine Cain (Frenchy), Chris Durling (Doody), Sam Ludeman (Sonny), Duane McGregor (Roger) and Laura Murphy (Jan).

“GREASE is one of my favourite musicals, and with this top draw cast of musical theatre stars I have no doubt it will again be everyone’s favourite party musical,” John Frost said. “I’m thrilled that Rob Mills will be our Danny, straight from his success in Legally Blonde, and that we have found a new leading lady in Gretel Scarlett. Both Rob and Gretel gave sensational auditions, and our UK creative team knew instantly that they were the ideal Danny and Sandy. What can I say about this cast – You’re The One That I Want!”

Win 1 of 3 Double A Reserve Passes to see GREASE!
We have one pass for each of the three cities: Brisbane, Sydney and Melbourne.

To Enter: Email info@danceinforma.com with your Name, Date of Birth, Email Address, Postal Address and Phone Number and answer this question: “What are the names of the two lead characters in GREASE”? Entries close August 5.