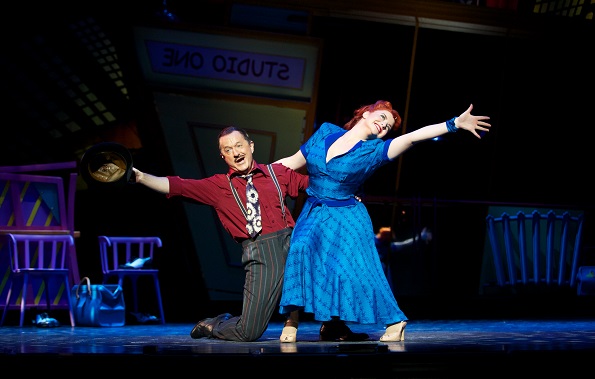 Australia’s own Song and Dance Man, David Atkins, returns to the stage to celebrate the 21st Anniversary of his highly successful and original tap dance musical, Hot Shoe Shuffle. It’s a full circle for Atkins who has achieved international fame as a performer, choreographer, producer and director, with accolades that include producing the Opening Ceremonies for the Sydney 2000 Olympic Games and New Zealand Rugby World Cup.

Lacing up his tap shoes once again, Atkins is back on the Australian stage taking on the more senior role of Dexter, the father of the seven Tap Brothers and their long lost sister April. Twenty-one years on, it’s a new era for the show with many of the young cast only toddlers when Hot Shoe Shuffle first premiered back in 1993.

This highly entertaining musical pays tribute to the big band era of the 1940s, and stays true to its original storyline, which is a homage to the American vaudeville circuit and showcases tap dancing at its best. In 1995, the show was internationally recognised with a Laurence Olivier Theatre Award for Best Choreographer for Atkins and Dein Perry, and in the same year it also won an Australian Green Room Award for “Best Original Choreography.”

As a loyal fan of the original musical, I was thrilled to meet David Atkins and get the inside story on the return of Hot Shoe Shuffle, how it launched the careers of some of Australia’s best tap dancers and why it’s a show not to be missed!

What can people expect from the musical Hot Shoe Shuffle?

Anyone who has seen it before will be coming back to experience what they saw the first time, which is fantastic dancing! The show is predominantly (and was inspired by) tap dance, but it’s a fully fledged musical, so you’ve got these fantastic tap routines that are combined with great songs, and the music is all well known big band hits of the 40s and 50s.

With the new production we’re actually lifting the stakes and increasing the skill sets of the boys (the seven Tap Brothers). We’ve really got the potential of eclipsing what we did the first time, and part of that is due to the fact that the boy’s skill sets are so much stronger because there’s been 20 years since Hot Shoe started and Tap Dogs in-between, and lots of other shows. Also we’ve got a lot of new stage technology that has developed in that time, so I think the show visually and in dance terms is going to be better than it ever was.

Is it true that Hot Shoe Shuffle launched the career of Adam Garcia (Saturday Night Fever, Coyote Ugly) and Dein Perry (Tap Dogs), and paved the way for Tap Dogs?

Absolutely. It preceded Tap Dogs, so the first show that Dein ever choreographed and worked on (in a production sense) was Hot Shoe, and it was off the back of Hot Shoe that he actually did Tap Dogs.

I pulled Adam out of school – I actually had to go and convince his mum to let him leave the HSC. He was 17 and I made an agreement with his mum that he would come back a year later and do it by correspondence. Of course, a year later he was on the West End. So, Addy’s first big show was Hot Shoe and it took him overseas, and while he was doing Hot Shoe in London, the producers of Saturday Night Fever and Grease saw him and that’s how his career developed in London.

The original Hot Shoe Shuffle was choreographed by yourself and Dein Perry. Will you be working with Dein to revisit and update any of the choreography?

Absolutely. Dein and I have already talked about that. And because of the skill set and the 20 years in-between when we originally created those steps, Dein wants to get back into the rehearsal room with us. We’re not going to throw the baby out with the bath water. We’re going to keep the essence of the show but there is definitely the chance to improve and also to take on the skills of the boys and bring this back into the show.

A scene from Hot Shoe Shuffle

Do you have any plans to bring Dancin’ Dynamite or any of your previous shows back to the stage?

No. [Laughs.] I don’t know how those shows would go now. I think they’re very much of their time. The one thing about Hot Shoe is that it’s universal in terms of the time because it’s a period piece, the nostalgia aspect of it worked. People loved it in the 90s and they’ve loved it each time it’s come back again. We’ve also done a special treatment of it. It’s got a Dick Tracy, cartoon-feel about it and all the elegance of the Fred Astaire and Ginger Rogers movies in the second half. I think that’s something that audiences really respond to and anyone who has seen a technicolour musical or a black-and-white Fred and Ginger movie will love the show because that’s what we’re paying homage to.

Did you find it difficult to cast the show, and what were you looking for in the auditions?

We cast the show across three states and we saw a lot of people. It’s a difficult show to cast because we’re not only looking for fantastic dancers. They also have to fit into the character types and they’ve got to be able to sing and act.

One of the things that has also happened in the 20 years since we did it the first time is that kids and their training have really broadened. So in those days if you were a tap dancer you were pretty much a tap dancer. Now if you’re a tap dancer you’ve got to be able to act and sing and you’ve got to be a genuine triple threat, and that’s what we saw in the auditions. Some of these boys are great singers too. So, what we were looking for were people who could fill all of those things. I think by the time we finished the auditions we had pretty much two or three boy candidates for every role, so we were pretty lucky. We’ve got a great group.

What are you looking forward to most about this show?

You know what, it didn’t really click or register until I started looking at footage of the old show, and I’d have to say getting back on stage with this show is going to be really reinvigorating, and it’s going to be good for my soul, because basically this show has got such a great sense of good will and joy about it and we really had so much fun when we put it together and we performed it. I think that was infectious and it transferred from the stage across the footlights to the audience and that’s the success of the show.

Looking at it today, I was watching it and thinking, ‘You know what? I love doing this and it was actually great fun.’ So I’d forgotten in worrying about ticket sales and production elements, and seasons and booking theatres and all that. I sort of lost touch with why I was doing it. That’s why I’m doing it, because it’s just great fun to do!

So this is the first time that you’ve returned to the stage in 15 years? Originally you played the role of Spring (lead Tap Brother) and now Dexter (Father of The Tap Brothers). How have you prepared for this role?

Yes, I can’t even remember the last time I was on stage! I couldn’t play Spring 21 years later because my legs just wouldn’t stand up for it. I’m back into training and I’m pretty fit generally, but fortunately, Dexter is much more an acting and singing role, and I’ve got a couple of nice slow tap routines to do so I’ll be fine.

What’s been your career highlight?

Hot Shoe. It was homemade, we created it ourselves and it holds a very special place. Before Hot Shoe I guess one of the biggest turning points was A Chorus Line. It was the show that put me on the map as a performer in Australia. Mostly they’ve been dance shows, and obviously, after A Chorus Line, I’ve worked in the theatre and done lots of musicals. The next big thing for me was the Olympics and moving into that forum and doing the Sydney Olympics, the Vancouver Winter Olympics and The Asian Games.

So what’s your key to being successful in the entertainment industry and achieving that longevity?

Just getting up and doing it every morning. Not giving up!

Hot Shoe Shuffle has just finished playing at Brisbane’s Lyric Theatre, before opening at the Lyric Theatre Sydney from 6th July and Her Majesty’s Theatre Melbourne from 10th August. Go to www.hotshoeshuffle.com for more information.