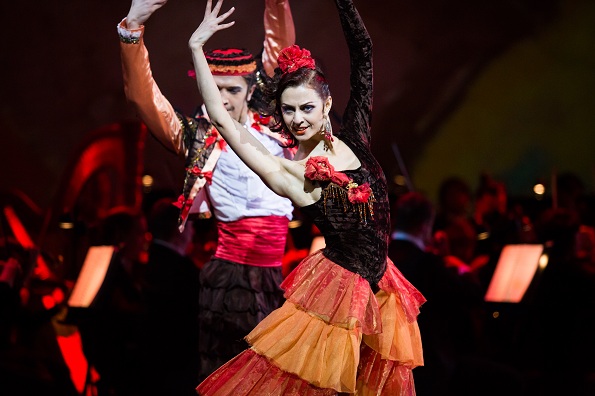 Combining the Moscow Novaya Opera Company and orchestra with four soloists from the Imperial Russian Ballet, Operamania was devised by former stage director of Novaya Opera, Valery Raku. It offers “a kaleidoscope of many of…the most loved pieces from opera, ballet and symphonic music and reflects their depth and diversity.” The pieces flow without pause from one into the next, incorporating a variety of moods – from tragedy to comedy to lyricism.

The crowd in the Angel Place Recital Hall is decidedly Russian and decidedly enthusiastic. From the opening selections from Bizet’s Carmen, one cannot help but be drawn into the spectacle – the voices are powerful and impressive, the accompanying video series of paintings from diverse Russian artists provides a colourful and ever-changing backdrop.

As with any compilation it’s no easy task to create context. An audience invariably searches for a story. The stage director, Alexey Veiro, explains the creative process of attempting to create story lines out of seemingly incompatible components. “At rehearsals we were able to find a variety of musical numbers and their relationships with some new meanings. We managed to build a performance in which the numbers are related one to the other, and each character is interacting with others.”

Thus we flow from Carmen to a piano medley of Chopin, Liszt and Rachmaninov accompanied by a lyrical pas de deux in the style of Les Sylphides. Yaroslava Arapanova and Alexander Volkov are leading soloists of the Imperial Russian Ballet and, as with all the dance layered within Operamania, their technique and lyrical quality is outstanding. It is not an easy feat to perform on a small slab of stage in front of a full orchestra where the cellists are perilously close to the pointe shoes. It is even more difficult to create context out of nothing, but these dancers know how to create a moment.

Three pas de deux from Tchaikovsky’s Nutcracker Suite work well in the Operamania context, as they are taken from a ballet divertissement within the ballet, which is not related to the main action. The “Spanish Dance” and Russian “Trepak” folk dance are both perfect vehicles to demonstrate the virtuosity and passion of Anna Pashkova and Igor Davydov.

Part II of the programme opens with music from 19th century French composer Camille Saint-Saëns and choreographer Mikhail Fokine’s Dying Swan, created for Anna Pavlova in 1905. The exquisite Arapanova portrays this solo – an intense and moving two and a half minutes that evokes the fragility and pain of a dying bird. A further highlight from Part II is the Sleeping Beauty grand adage pas de deux, danced to the tragic strains of oboes in Tchaikovsky’s score, where we are again mesmerised by the lyrical Russian dancers.

Despite the interaction and variety I was nevertheless left with an overriding sense of the comic, which clashed with the pathos of arias such as Nessun Dorma – umbrellas bedecked with gold stars twirling around a tragic soul was just a little too much for my sensibility.

As the show draws to a close with a Strauss Polka, the audience rises to their feet clapping under the conductor’s direction. It has been an evening of high drama, brilliant dancing and Russian style.