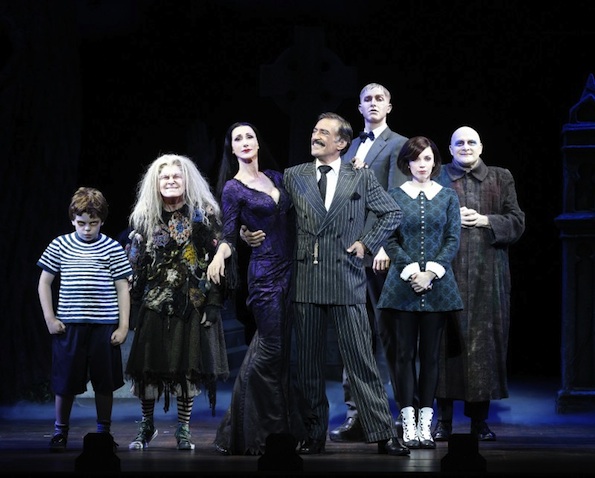 Going to The Addams Family, I was excited to be re-living a part of my childhood; The Addams Family was a TV show I loved when growing up. I have a special affection for the character ‘Wednesday’, who this musical was based around. I was around the same age as her when I was first introduced to the show in the form of re-runs of the black and white variety. And then there were the movies, of which I was also a fan. One would hope, knowing this show is somewhat an iconic part of our Australian childhood, that we might be able to catch a glimpse of that in this musical version of the show. Not so. The musical version was an entirely poor and weak version of its TV counterpart.

The cast was a talented group of singers, dancers and actors. They delivered their lines extremely well, and had us in stitches at many points throughout the performance with some highlight comedic moments. The show did not fail in terms of talent and ability on the part of the cast; they did what they could with what they were given. If one was not an experienced performer or too knowledgeable of the original show, they may really enjoy it based purely on the comedic factor, and the talent of the cast.

The really disappointing factors of this production were mostly in the writing and the structure of the show itself. It launched all too quickly in to the guts of the story itself, almost expecting that everyone who came to watch the show would already have a full background and knowledge of The Addams Family characters and their quirky nuances – this would not be the case for most people under the age of 25.

Most songs had quite interesting lyrics, but at times tried to fit way too many lyrics and ideas into the one number creating an Olympic-sized feat for the performers to deliver. Usually when one attends a musical, there are some songs that stick with you and you want to download the soundtrack or buy the CD right away. Not so with this show. A lot of the songs and their melodies also felt ‘borrowed’ from other musicals.

Having a special affection for Wednesday, I found her character to be the most unlike her original character in the ‘musical style’ version of herself; she was entirely the preppy American teenager with a slightly try-hard ‘emo’ side. I do not believe this musical was about making fun of the original, so it surely fell short in the character development phase. Wednesday was originally described by creator Charles Addams in this way: “Child of woe is wan and delicate…sensitive and on the quiet side, she loves the picnics and outings to the underground caverns…a solemn child, prim in dress and, on the whole, pretty lost…secretive and imaginative, poetic, seems underprivileged and given to occasional tantrums…” This was nothing like the version we see in the musical. Other characters were more developed towards authenticity of original self, but there was not a sense of the cast being able to really embrace who their characters were.

The choreography was undeveloped and very predictable, and did not blend well into the story. One does not expect to see eisteddfod style choreography (prepare, double pirouette, jumping jack) in a character’s introduction, in a professional show. Some moments were interesting, but overall, it was quite poor and not as interesting as I would have expected.

All in all this was probably the most disappointing and underdeveloped musical I have seen to date. It was extremely funny, but disappointing in so many other ways. It is always worth going to see a show that is based on something as iconic as The Addams Family, but if you’re a fan of the original show it may not live up to expectations.

Photo (top): The Australian cast of The Addams Family. Photo by Jeff Busby.