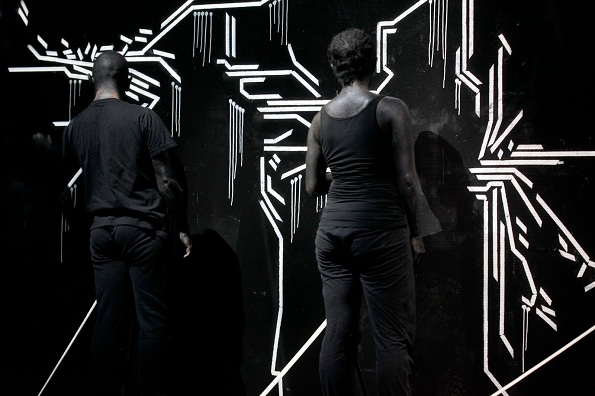 Is pixel management the next frontier of dance? Digital artist Olaf Meyers insists his multimedia light show for Antony Hamilton’s Black Projects is like having another dancer on stage.

The prevalence of multimedia in contemporary dance is one of the so-called ‘debates’ that delight and divide critics and cognoscenti alike. Do video projections add or detract? Does our addiction to the screen mean that we are losing the ability to watch live performance?

Away from the righteous thrill of dinner party pronouncements and reviewer angst, multimedia projection artists like Olaf Meyers are simply getting on with the business of animating pixels.

A digital artist since his high school days in the 1990s, Meyers’ work has adorned building facades, gallery spaces and theatre sets alike. This month his video art for Antony Hamilton’s Black Project 1 will once again light the stage as part of the 2013 Dance Massive event.

“In essence I’m using the mechanism of the video projector as a light source,” he says with understated clarity. “Because I’m pretty experienced in controlling the pixels I can make that light source become an extra layer of movement. I can enhance the shapes that are being drawn on stage with bodies.”

It is notable (and clearly relevant) that Meyers refers often to movement. “Physical performance has always been a real attraction for me,” he explains. Indeed, his Masters degree focused on the integration of “meaningful images into physical performance.” No surprise then that for Black Project 1 Hamilton commissioned Meyers to “to superimpose virtual movement onto actual movement.”

As Meyers prefers it, “I like the word ‘symbiosis’ because that’s what he wanted to achieve with elements of light and body and sound. I helped him translate the rhythmic movement in his choreography into rhythmic visual elements in the set design. I did that by using textural video maps that interacted with the choreography.”

All this fine point discussion is, of course, only natural in the context of an event like Dance Massive; which coordinates eighteen shows in thirteen days across four inner Melbourne venues. More than a simple showcase, it represents a gathering of the dance tribe, with contemporary stars like Chunky Move, Lucy Guerin, Larissa McGowan and Russell Dumas all on show. Dance fans will not only get their fix but also witness their share of multimedia.

Reflecting on the perceived mismatch between the dance and digital art cultures, Olaf Meyers says, “Working with dancers reminded me that high-tech solutions are not always needed. I mean, they’re techno-phobes in a way but that didn’t really limit the outcome. I watched them draw abstract landscapes with their bodies and this analogue method, in my opinion, is what makes the work really cutting edge.”

It is perhaps worth noting that Meyers’ multimedia inspiration originated in the dance scene: namely, the 90s underground rave scene, where beats and visuals were first blended using comparatively primitive computers. In fact, Meyers recalls making his first pieces on (wait for it) an Amiga.

Clearly, both the technology and the vogue for inter-disciplinary mash-up have come a long way since then. Indeed, with Black Projects 1 & 2, choreographer Antony Hamilton is also leaping across the discipline gap; bringing dance into the world of subatomic physics by exploring the relationship between animate and inanimate objects. As the presser says, “Where does the body end and the space around it begin?”

In much the same blurring of the lines, Olaf Meyers regards his colour cycles and frame rates as being very much part of the dance. “That all relates to my fascination with the perception of rhythm in movement and the way it carries meaning,” he elaborates. “The great thing about dance and also the visual effects I produce when I’m VJing is that there is a similar use of visual rhythm.”

Even though Hamilton and his dancers had almost fully developed the work before Meyers turned up, there was the excitement of bringing the two mediums together. As Meyers recalls, “During development, the interaction of the visuals and the live movement was just great because it allowed for the nature of play to stay in the work. And that’s significant because so much of what I do is kinda tedious and repetitive.”

Whether the ‘light’ is another dancer or not will remain contentious, but it seems clear that the creative drivers of Australia’s contemporary dance community are enamoured by multimedia projection. For artists like Olaf Meyers that can only be good news.