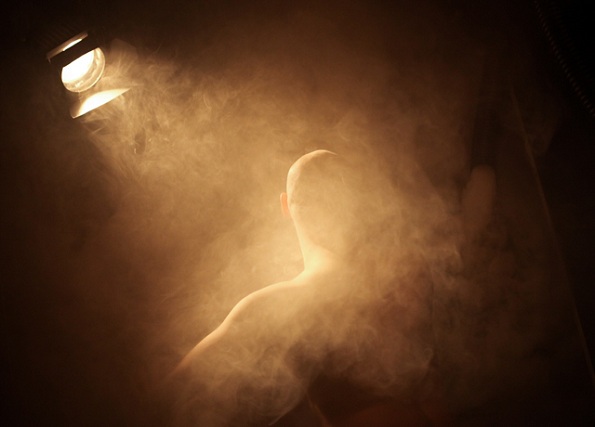 A man sits alone, lit from above by a single spotlight. His uniform indicates that he is a middle-aged nurse. Rolling himself a cigarette, he sits back and enjoys it as smoke fills the room. Soon, smoke is entering from the sides of the stage, creating a moving carpet, whilst a ‘performer’ uses devices to manipulate it suggestively. It is the smoke rather than the performer that is truly centre stage in Ashley Dyer’s Life Support.

The smoke creates some arresting visual images. Bubbles float in the air, a mysterious mixture of smoke and water, whilst the nurse draws the same mixture into his own body by enjoying a hot beverage.

Dyer has clearly experimented at length with the various effects and qualities of his subject matter. At times, one felt he was perhaps a little too in love with the possibilities it offered, not quite marrying it with his more pressing aim of engaging audience members with ideas of mortality, social responsibility and meaningful action in an age where climate change and the sinister repercussions we may face from it are highly current issues.

Nonetheless, Life Support does fulfil its raison d’être. Before the performance even begins, Dyer demands his audience’s self awareness, sending a quick survey around the foyer. One of the questions asks ‘Have you ever saved anybody’s life?’ Two people are nominated to potentially be chosen as a people’s representative, charged with the responsibility of ending the show. (Side note: By chance, I was nominated that night, my introduction as she who ‘made tea and soup for her fiancée when he was sick with the flu’ being obviously superior to the other nominee who, we were told, had once risked his own life to save two children from drowning.)

Upon entering the theatre, audience members were given little devices and instructed to use them as necessary to assist breathing during the show. Attention was consequently drawn to one very human vulnerability.

In one of the most memorable scenes, the nurse steps into the skeleton of a rectangular box and clear film is wrapped around the box, sealing him off from everyone. Smoke is introduced into the sealed area – a literal smoke screen between viewer and performer. As the audience representative, this scene was exceedingly hard to watch as I worried for the performer’s health. Should I abort the show and potentially save the nurse’s life, or do I stay put and do as instructed? I suspect engendering this inner tension was Dyer’s intent all along.

Life Support is a thought-provoking work which pushes the audience to the limits of what they might consider ‘dance’, keeping physical performance to a minimum. Indeed, Life Support defies easy categorisation and this will make it hard to watch for the uninitiated dance-goer. Firmly on the conceptual and cerebral side of physical theatre, Life Support will be of interest to those who are not afraid of a little physical discomfort and like their art works to provoke and ask questions rather than entertain.