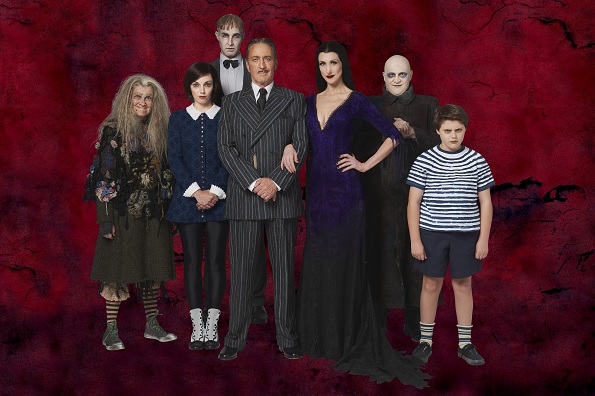 The Addams Family will be making its musical debut this year in Sydney on March 23rd. The freakishly fun production will feature all the signature characters and stay true to the quirky original theme. In celebration of the news, Dance Informa caught up with Chloe Dallimore and Teagan Wouters who will play the roles of ‘Morticia’ and ‘Wednesday Addams’.

Congratulations Chloe on landing the role of Morticia Addams! Do you enjoy playing roles in family favourites like Annie and The Addams Family ?
I think the beauty of something like Annie or The Addams Family is that people already know (the story), and they have a sense of what they might expect. They come with that to the theatre, which is terrific, but it also adds pressure as a performer to make sure that the characters that people have loved and grown up with are portrayed as genuinely, and with as much integrity and love as possible. We don’t want people walking away going, “oh that’s not what I imagined”. We want them to feel as if they’re being totally transported into that family or story that they have loved so much. So it’s a big responsibility, whereas with something like Chicago or Sweet Charity it’s a little more of a blank canvas and the audience is not so familiar with the specifics of the show.

When reading reviews of your performances, critics make note of your great comic timing. Have you always considered acting to be one of your great strengths?
I began as a dancer, so that’s the thing that seems to come most naturally for me. Singing was next and then the acting was something I discovered in my late teens. I think comedy depends so much on the other performers around you as well. We’ve all seen comedy sketches where all the performers just gel incredibly well. So I’ve been very lucky in my comedic roles to be cast with other actors who also have brilliant acting instinct. I’ve learnt so much from them and the audience teaches you a lot about acting. You’re always trying to fine-tune the audiences understanding of the character. So acting is something I probably work hardest on when I’m preparing for a role, and I try to be as instinctive as possible.

Speaking of other great actors, how was it working alongside Todd McKenney in Annie?
We’ve had a fantastic time together. Probably the greatest thing about working with him is his ability to bound onto that stage with 300% energy every single night, no matter what kind of day he’s had. You feel that energy next to you and you have to meet it. He’s also wonderful at talking constantly about how we can improve something. He’s very open and very generous, so I think it’s been a very successful and wonderful working partnership.

How do you ensure you’re in peak condition during performance season? Do you try and fit in dance classes here and there?
The difficulty I have is that I move around so much that it’s very hard to commit to certain dance classes. Another part of my life is Pilates and Xtend Barre. Xtend Barre is a really safe way of working out with all your Pilates principles. It really targets the muscles but protects all the joints so you can keep your body safe and still challenge it to its maximum. Not only am I teaching it, but I also put myself through my own Pilates and Xtend Barre practice every day. I find that it offers me the opportunity at this stage in my life to strengthen and keep my body strong, toned and flexible, without fatiguing myself before the eight shows a week.

Congratulations Teagan on securing the role of ‘Wednesday Addams’! How excited are you to be part of this production?
I’m so excited! I can’t wait for it to start quite frankly! I’m thrilled.

Can you tell us about the audition process?
I initially auditioned in December [2011] for the musical director and the casting agent. That was my first audition and then I got a call back a couple of months later to audition with the American creative. It was a really fast audition! I worked with them for maybe 20 minutes or so. It was a really simple process, which was good. I wouldn’t say it wasn’t hard though. I had to prepare two songs from the show and sing those, and there were about four scenes from the show that I also had to do.

Do you think your study in musical theatre at the Victorian College of the Arts prepared you well for this role?
Absolutely! I think any sort of study that is about the theatre is going to help you with auditions, researching roles, and all that kind of thing. I’m definitely very grateful for my training at the VCA.

When do rehearsals begin?
We haven’t started yet. We don’t start rehearsing until the end of January.

Have you met the rest of the cast yet?
I’ve met a couple of them at the launch. I’ve met Chloe Dallimore, Meredith O’Reilly and a few others. Everyone’s lovely and I think it’s going to be a really fun cast to work with.

Do you feel any pressure working alongside performers who have been in the industry for a long time?
I don’t think I feel pressure. I think it’s definitely a case of being so excited to work with people of their calibre! I’m sure I will learn a whole heap off them. I’m really excited about it.

Would you say musical theatre is your passion? Are musicals what you would like to continue doing?
Yes, I think so. I studied musical theatre so I think it’s my ultimate passion. I wouldn’t mind getting into TV and film though. I really like the vibe of the live audience; seeing their reactions and the feeling you get from performing live. I do think this is where I will begin and probably end up.

WIN A DOUBLE PASS!
Dance Informa has 2 Double Passes to giveaway to the preview performance of The Addams Family at the Capitol Theatre, Sydney on Tuesday March 19.

To Enter: Email info@danceinforma.com with your Name, Date of Birth, Email Address, Postal Address and Phone Number and answer this question: “Who will play Morticia Addams in the Australian production of The Addams Family?”
Entries close Feb 20.