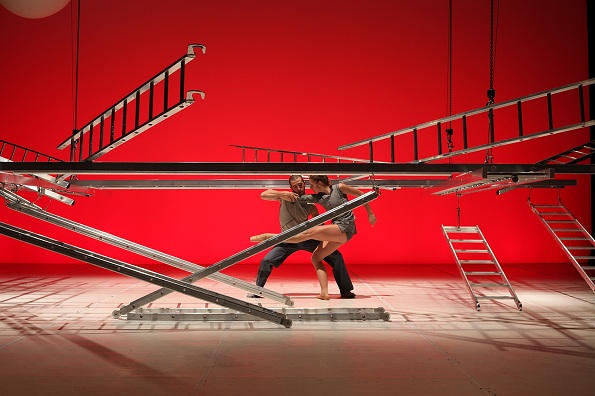 The 2013 Perth International Arts Festival program offers a feast of culture for arts lovers of all ages and persuasions, spilling across the unique venues and spaces of one of the most beautiful cities in Australia.

In 2013, the Festival delivers a superb program celebrating works of imagination and integrity, created by artists who are daring, thoughtful, and original.

Artistic Director Jonathan Holloway said, “In the 2013 Festival we have invited some of the world’s most exciting artists to descend on Perth, to be inspired by and respond to the beauty of our city and to perform and collaborate with the vibrant artistic community of Western Australia.”

The 2013 Festival will explode out of the blocks, literally, with the Lotterywest Festival Spectacular B.P.M. Bombs Per Minute from Les Commandos Percu (France). From the darkness, a clock ticks, bells toll and fireworks hypnotically dance across the night sky. Fresh from opening the 2012 London Olympic Games, these masters of the high octane arts of explosives, percussion and drumming are ready to get the Perth Festival going with a bang in 2013.

The Festival’s free program takes art to the people and turns people into art: the streets of Perth become a theatre and an art gallery for the Lotterywest Festival Celebration La Marea, an Australian exclusive that sees ten scenes play out in the illuminated windows, balconies and cafes of Rokeby Road.

The dance program presents the visionary and internationally acclaimed Shiva Shakti from Daksha Sheth Dance Company (India). They present a stunning blend of Indian classical dance, aerial performance, martial arts and yoga performed by Isha Sharvani, Bollywood actress and one of India’s finest dancers. The Ballet National de Marseille presents The Truth 25 Times a Second, an extraordinary collaboration between Belgian choreographer Frederic Flamand and acclaimed Chinese visual artist Ai Weiwei that pushes the limits of human movement and STRUT dance in accociation with Steps Youth Dance Company and the Centre Choregraphique National de Grenoble present3G (Trois Generations).  A gift to Perth from French choreographer Jean-Claude Gallotta, 3G (Trois Générations) places the cycle of life centre-stage and magnifies its beauty as a single dance score is interpreted in different ways by three generations of dancers. This Australian premiere marks the tenth year of the production, the original having taken place at the Festival d’Avignon, France.

The 2013 theatre program traverses the spectrum from the sublime to the surreal. One of the world’s great companies, Bertolt Brecht’s Berliner Ensemble (Germany) comes to Australia for the very first time with their masterwork The Threepenny Opera. Epic in scale and ambition, three of Australia’s most revered artists, director Neil Armfield, writer Andrew Bovell, and artistic associate Stephen Page come together for the first time to adapt Kate Grenville’s acclaimed novel The Secret River for the stage. The most entertaining musical about economics ever, Mission Drift by New York darlings The TEAM (USA) takes audiences on a pioneering journey across the USA in search of capitalism, with a score that fuses Vegas glitz, Western ballads and Southern blues. Lose yourself in the nostalgic romance of the spectacular vintage big-top tent with the Australian exclusive La Cucina dell’Arte from sixth-generation circus performers Circus Ronaldo (Belgium). The National Theatre of Scotland return to Perth with with their pub-crawling, manically funny theatrical hit The Strange Undoing of Prudentia Hart, an evening of anarchic theatre, supernatural storytelling, live music and strange goings-on. The Holy Trinity of Irish Theatre: Gate Theatre Company (Ireland), Samuel Beckett and Barry McGovern come together for the Australian exclusive performance of Watt, Beckett’s extraordinary and hilarious  story of the bizarre adventures of an itinerant character and his struggle to make sense of the world around him.

Rediscover a sense of magic and wonder with the Perth Festival programming for the young and young at heart. Vibrant, playful and fantastical, Clouds by Aracaladanza (Spain) is a mesmerising journey into the surreal world of Rene Magritte: clouds transform into sheep, dancers perform captivating routines and giant green apples fall from magical trees. Arena Theatre Company (Aus) presents The House of Dreaming, an incredible interactive labyrinth brought to life by an innovative combination of robotics, performers and projections, a three-dimensional storybook of wonder and dreams. Barking Gecko Theatre Company (Aus) presents the world premiere of Duck, Death and the Tulip, a thoughtful, tender and intriguing tale about a duck who strikes up an unlikely friendship with death.

In a feast for music lovers, three towering figures of contemporary music make their way to Perth. One of the most influential composers of our time, Philip Glass brings his deeply personal piano etudes to Australia, presenting the world premiere performance of all 20, including three commissioned specially by the Festival. The etudes are performed by Glass with long-time collaborator Maki Namekawa, and Australian pianist Sally Whitwell. Two legendary forces in new music: Laurie Anderson and Kronos Quartet, come together for the first time for a phenomenal evening of electrifying sound. Music and art come together in an extraordinary Perth Festival commission; visual artist Benjamin Bergery and St George’s Cathedral Consort present Tenebrae et Lux (Darkness and Light), combining glorious a Capella singing with a new light-based installation.

Perth will rock throughout the Festival to an eclectic selection of sounds from some of the most idiosyncratic musical performers from around the globe including Cat Power, Maceo Parker, Chrysta Bell, Godspeed You! Black Emperor and Dead Can Dance.

The 2013 Visual Arts program highlights two artists using technology to create deeply engaging work. Jim Campbell’s Scattered Light, is a remarkable canopy of suspended light bulbs that morphs into a 3D screen as the sun goes down, projecting the bustling energy of city life. Srinivas Krisna’s My Name is Raj is a participatory installation that honours the work of Bollywood pioneer Raj Kapoor. The audience becomes the art, as their own images are superimposed into Kapoor’s cinematic world in the guide of starring characters.

For more information, the full list of events and tickets visit www.perthfestival.com.au.