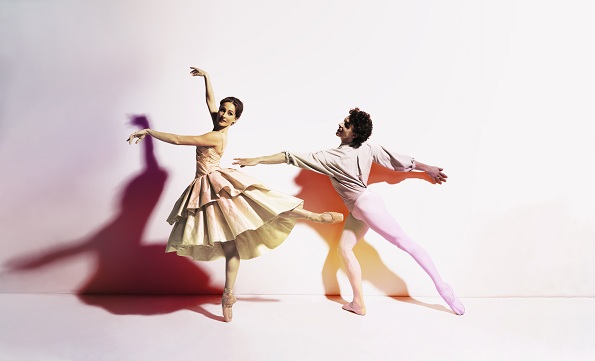 In the Australian Ballet’s 50th year Dance Informa is celebrating the company by highlighting three of the Ballet’s Principal Dancers each edition. Learn a little more about Australia’s 12 leading ballet dancers.

When in her second year at the Australian Ballet School, Rachel Rawlins was invited to be an extra with the company. At the end of that year, she was offered a contract. She was promoted to soloist four years later and then danced with The Royal Ballet in 1999 for two years. On her return, Rachel started to perform more principal roles and was promoted to Principal artist in 2004.

What is your first memory of dance?

I was taken to an Australian Ballet production of Swan Lake in Canberra when I was about five. I think it was this performance that inspired my love and passion to pursue the profession.

Rachel Rawlins in Les Sylphides for The Australian Ballet. Photo by Alex Makayev

It is a highlight to have joined The Australian Ballet and become a Principal artist. Another career highlight is to have been a First Soloist with The Royal Ballet. International touring is always exciting, and I have danced in Asia, Europe, England and the United States. Being a part of the 12th World Ballet Festival in Tokyo and watching so many international dancers performing together is a special memory. The ballets I have recently really enjoyed dancing have been Madame Butterfly, The Merry Widow and Onegin.

How many ups and downs there can be. Most people wouldn’t realise how long we spend talking about how to improve movements and technique.  Communication is an essential part of putting a ballet together and making partnering secure and smooth.

I like watching movies, going for walks, bike rides, the beach, spending time with my family and friends. I have two little nephews who are always entertaining.

Do you have a favourite movie?

I love movies. Three which have made an impact on me are In The Name Of The Father, Jesus of Montreal and Gone With The Wind.  At the moment I’m watching Silk and The Tudors.

I think choreography is the most difficult art and I admire the courage of anyone who attempts it. I’ve just finished Onegin, so John Cranko, because of the three very different beautiful pas de deux for Tatiana.  Last year it was Stanton Welch’s choreography and Robert Curran’s partnering for making me fly in the heart-stopping pas de deux for Madame Butterfly. The Australian Ballet’s dancers are fortunate to have the opportunity to dance so many different works created by Australian and international choreographers.

Not to lose sight of the love for the art form while you are facing your daily difficulties and demons.

Do you have a quote or affirmation that helps you through, or that means a lot to you?

A few years ago I had very sore calves and a really bad flu during a season of Sleeping Beauty. Now whenever I feel a bit sensitive or low I always think, “Well you got through that, so you can get through this”.

Performing. You can share the experience and give pleasure to other people, while doing something you love to amazing music.

Kevin Jackson and Madeleine Eastoe in The Australian Ballet's Romeo and Juliet. Photo by Georges Antoni

Perth-born Kevin Jackson joined the Australian Ballet in 2003 at age 18. His first big break was performing Balanchine’s Apollo in 2007. He was promoted to Principal artist in 2010, following a performance of The Nutcracker pas de deux with Rachel Rawlins.

When did you know you wanted to be a dancer?

When I was taken to my cousin’s dance school concert in 1989. I sat in the audience and as the lights in the auditorium went down and the overture began a rush of excitement waved through my body. I was completely captivated. I remember sitting there thinking to myself, I want to be up on that stage.

What was your first role as Principal artist?

Performing Prince Ziegfried in Graeme Murphy’s Swan Lake alongside Madeleine Eastoe and Lucinda Dunn, at opening night of our recent tour to New York City. It was a dream come true to be performing at New York’s famed Lincoln Center.

Nacho Duato’s Remanso, Albrecht in Giselle and Crown Prince Rudolf in Kenneth MacMillan’s Mayerling. There are a lot more too!

The hours we spend outside of the studio; body conditioning, physiotherapy, full body ice baths. Also eating correctly for optimal energy during shows and the persistent thoughts of repertoire all day, every day, even in your dreams.

Watching movies with my beautiful partner and renovating our apartment.

Most likely an actor, teacher or swimmer.

Do you have a favourite movie or TV series?

Graeme Murphy has been an incredible mentor and one of the driving forces behind my career so far. I owe a lot to him and Janet Vernon.

I dance an incredible number of shows per year. It is a challenge to stay balanced and calm when I’m learning four or five different roles at the same time. Staying mentally and physically fit when traveling for months at a time is extremely challenging too, but also one of the perks!

Do you have a quote or affirmation that helps you through, or that means a lot to you?

Taking audiences away from their life for a show and transporting them to places like fictional lands, back in time or to an abstract environment. On a more selfish level, inhabiting those places as a dancer is also pretty phenomenal.

After growing up on the Sunshine Coast in Queensland, Amber trained at the Australian Ballet School before joining the company in 2001. In 2003 she went on exchange to The Royal Danish Ballet. She was a guest artist on The Dancers Company (the regional touring arm of The Australian Ballet) tours of 2003 and 2004. In 2011 she became a Principal artist.

What was your first role as Principal?

I was promoted after performing the 2nd Movement from Kenneth MacMillan’s Concerto at the Sydney season of the triple bill British Liaisons in 2011. Concerto was the opening piece in the triple bill so I had the interval to regain composure and then performed Christopher Wheeldon’s After The Rain. So technically, After The Rain was my first performance as a principal artist.

There have been so many special moments along the way. I am truly grateful and find it quite hard to choose one in particular. A few highlights are: performing Leigh Rowles’ Ascension alongside my brother in 2003, my first principal role, dancing Odette in Swan Lake when I was 21, performing Manon in 2008 and dancing the role of Tatiana in Onegin this year. Add to that dancing Graeme Murphy’s Odette in Swan Lake in Shanghai, Paris, Tokyo and New York, performing in the Stuttgart Ballet’s 50th anniversary last year and being promoted to principal artist last year.

Which character in a ballet do you most associate with, and why?

I’m not sure if it’s because I have just played her but Tatiana (in Onegin) felt quite natural for me.  I also feel Odette in Graeme Murphy’s Swan Lake will always be an enduring association.

Odette in the traditional version of Swan Lake, Giselle, Marguerite Gautier in Lady of the Camellias, Nikiya in La Bayadere and Kitri in Don Quixote.

We are on tour a lot of the year and can perform as many as 12 different productions a year. It’s also not as glamorous as some people think. After a show it’s usually an ice bucket, back into sneakers and onto public transport!

I love being outside in fresh air!

Be patient with your body and tenacious in your spirit. Work hard but intelligently. Be brave and curious as there is much to be learnt on the road to becoming a professional and that road can get bumpy. Like all worthwhile journeys it’s the unexpected challenges that knit together to form a memorable trip.

Next Edition we will hear from talented dancers Leanne Stojmenov, Yosvani Ramos and Lucinda Dunn.