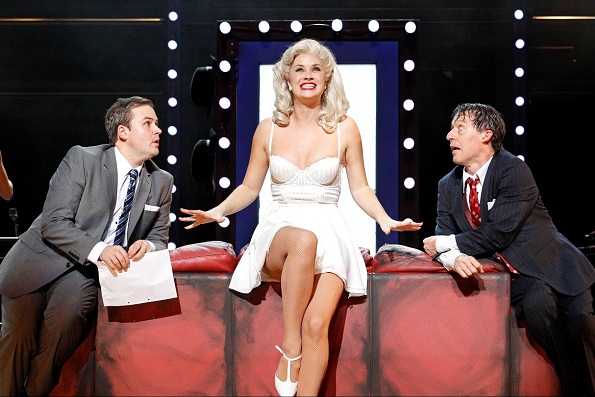 The Producers is everything a good musical comedy should be: camp, over-the-top and loads of fun. I had the pleasure of going to the The Production Company’s staging of it with no expectations to speak of; I had no prior knowledge of the show, or of either version of the movie. Later that evening, had you been at my place you would have found me having my own little youTube party, looking up clips of various renderings and singing along. Sad as this image may be, it’s a measure of how much I enjoyed the show.

It seems fellow audience members agreed, if the standing ovation was anything to go by. I find eavesdropping to be an effective tool for review writing, and on this occasion I was awarded with a corker; one of my fellows named Wayne Scott Kermond as “the best Max” Bialystock he had ever seen. Armed with my new youTube party research, I concur: Kermond did a fantastic job of the role.

In fact, the entire cast was great. When Christie Whelan was on stage, it was hard to look anywhere else; she really gave it her all as the sweet and sexy Swede, Ulla. Brent Hill was suitably nervous and awkward as the timid accountant, Leo Bloom. It’s not hard to see why this WAAPA graduate won a Green Room Award last year.

Rising star of stage and screen Virginia Gay made several cameo appearances, my favourites being the randy geriatric Hold-me Touch-me, and the butch-as-you-like Shirley. The variety of roles were evidently great fun to play, and Gay embodied each with a unique physicality, embellished with flawless comic timing.

However, it was Rohan Browne, as the uber-flamboyant Carmen Ghia, who stole the show. Here is an actor who really embraced his role, not just sketching it out but painting in a fabulous rainbow of colours, then sticking some feathers and glittery stuff on for added flourish. Right down to the movements of his fingers, Browne was utterly committed and entirely hilarious.

Carmen’s main scene, titled The Living Room of Renowned Theatrical Director Roger De Bris’ Elegant Upper East Side Townhouse on a Sunny Tuesday Afternoon in June, was the highlight of Act One. The number Keep it Gay was super indulgent and brimming with deliciously realised stereotypes; the costume designer, the choreographer, the musical director and the lighting designer.

You have to hand it to The Production Company: producing shows this good with only two weeks’ rehearsal is pretty incredible. I’m looking forward to their production of Chess, which comes to the Arts Centre this month. Now, back to youTube…