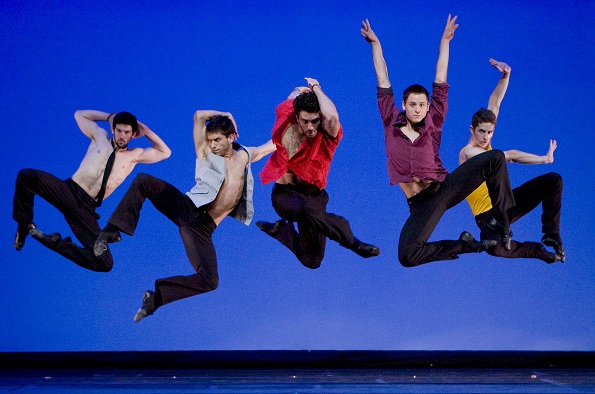 Ballet has certainly evolved in recent years, with classical companies employing more modern works and using edgier marketing techniques in an attempt to broaden ballet’s appeal.  Leading the renaissance is Rasta Thomas’ Rock The Ballet, which has returned to Australia, much to the delight of audiences nationwide who raved about the performances from the company’s last visit.

Rock The Ballet started with a bang, featuring the Bad Boys of Ballet dancing a combination of jazz, contemporary, hip hop and ballet to the Black Eyed Peas’ I Gotta Feeling.  The song choice was a bit trite but the dancing was superb.  The men were masters of technique and had extraordinary energy.  And when Rasta himself burst on stage, the audience (including myself) went wild.  Justifiably so, as he is one of the best male dancers in the world and has shown great bravery by leaving the classical world of ballet and forging a new direction with this company.  The second piece was hilarious, clever, and showed that ballet can be so much more than tutus and tricks.  The men performed with blow up dolls which they partnered through many humorous scenarios in perfect unison.  One has to wonder how that idea came about…

Unfortunately, Rock The Ballet ran out of ideas soon after that.  The dancing remained brilliant and the music continued to be inspiring and entertaining, but the production could have been so much more.  Rasta’s wife and the sole female dancer in the ensemble, Adrienne Canterna-Thomas could have been utilised more in partnering work with some daring lifts and throws.  Although a strong dancer she seemed out of place and not integral to the overarching production.

Rock The Ballet is undoubtedly an entertaining night out and a revelation for not only ballet, but dance itself. The encore alone was enough to satiate even the harshest critic.  I just hope that the company’s next outing develops the ideas presented further.