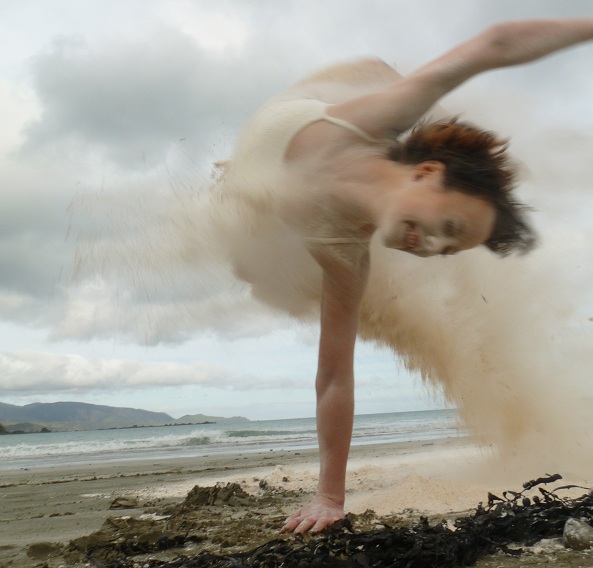 Contemporary dance often has an aura of mystery about it. It’s not ballet, it’s not hip hop, and it seems to be different wherever you go. That’s one of the best things about it! Here Rain Francis talks to Sacha Copland, Artistic Director of New Zealand’s Java Dance Company, about the curious world of contemporary dance.

Java Dance Company was founded in 2003 by Sacha and fellow graduates of New Zealand School of Dance. It is based in Wellington but tours a lot around the country. Java’s mission is ‘to capture audiences with visceral, impressive dance that communicates’. This goal is realised by ‘creating and presenting original theatrical dance works built on dynamic physicality, character development and storytelling’.

Earlier this year, Java was at the Taranaki International Arts Festival performing two shows –  Back of the Bus and Pick a Path – a show created especially for children. Back of the Bus is a popular piece by the company. It has been presented all over New Zealand. It is performed on a moving bus that stops at different locations around the city it is in.

On this occasion, The Arts Festival organisers worked with a graffiti artist to paint the bus, and they spray-painted a cartoon of Java dancer Natalie Hona on the back of the bus. Natalie was stoked, saying “I haven’t been turned into a cartoon before!”

Sacha says this is something she loves about contemporary dance; it uses “such a wide variety of movement in lots of different contexts”. Java’s latest project was a show called RISE, where the performers made bread on stage, on a massive scale, with “an exploding wall of milk and honey, flour falling and water bursting from the ground”.

Sacha says of RISE, “It was the most holistically challenging project I’ve ever been a part of,  from working with volatile elements to collaborating with a composer to create a new 90 minute work integrating the live musicians, to addressing the question ‘what is universal’ while embedded in the bread-making process. I loved making RISE, working with a tactile space rather than a ‘clean’ surface. The cast were incredible and so willing to get amongst the mess.”

RISE had an international cast, epic design and all the fun of audience involvement. It required over 1000kgs of flour, a rock climbing wall that ran the length of the theatre, live singers and intense physicality. It explored how a community comes into existence and involved the dancers getting covered in flour, honey, water, and dough. The audience helped by kneading the bread, which was then baked.

Dancer Alana Sargent described the experience of working on such a unique show. “RISE for me was a massive learning curve and I enjoyed every second of it. I found myself in new and insane situations that pushed me and made me grow as an artist. It opened my mind to numerous possibilities creatively, and I was constantly learning. Dancing in physical elements of flour, water and golden syrup really challenged me as a performer. Never once did a show feel the same as the last. I believe this show will never stop evolving and improving. I am so pleased that I have had the opportunity to be part of the creative process of such an innovative show.”

OK, so far we have a dance performed in a moving vehicle, and a giant baking experiment. So, what exactly IS contemporary dance? The cool thing about it is everybody defines it differently, and there’s not really any right or wrong definition. Contemporary dance began as an answer to the stringent rules of classical ballet, and has evolved into something with virtually no boundaries. It is interpreted differently by everyone – performers and audience members alike.

Sacha defines contemporary dance as “an intensely physical way to express an idea. It uses influences from theatre, lots of different dance styles and visual art”. The only rule, she says, is that “it must keep changing as the world changes. It’s about exploring new ways to move.”

Because there are so few limitations, this style of dance can be really accessible to everyone, or it can be quite challenging. Sometimes people say they don’t understand it, but the thing to remember is, whatever a piece of art means to you, is what it means to you! This goes for dance, visual art, poetry and music. They’re all open to interpretation, and every interpretation is valid.

According to Sacha, the contemporary dance industry in NZ is reaching out to audiences and changing the perception that contemporary is mysterious and hard to understand. She says that Java has a “really theatrical style, so people can connect with the story as well as the physicality. Communicating through movement is the key.”

Java has a strong youth connection. They make shows specifically for teenagers and tour high schools nationally, performing as well as conducting dance and choreography workshops. In Term 2 next year they’ll be touring North Island schools with Survivor, a show that explores how basic instinct drives us all as we negotiate our place in the pecking order.

In February, Java will be heading off on its first international tour, to perform Back of the Bus at the Adelaide Fringe Festival. The company invites you to ride on a bus through the streets of Adelaide, as dancers propel themselves along the aisles and hang from the roof. What fun! Physical comedy, pure kinetic energy and outrageous scenarios will combine to create a magical mystery tour of the unexpected.

This article was originally published in TEARAWAY Magazine – The Voice of New Zealand Youth. www.tearaway.co.nz