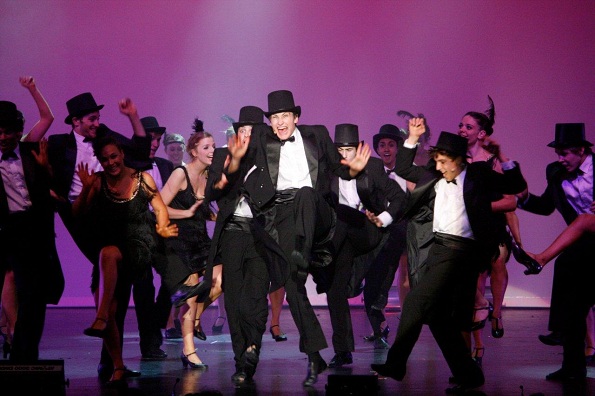 It has been two years since I attended Ministry of Dance’s inaugural fulltime showcase, and I was pleased to discover that Jason Coleman’s school has gone from strength to strength during that time.  The night was more polished, the pieces showed more variety, and the dancers were stronger and more assured in their performances.  The addition of themed acts created a cohesiveness that was lacking in the school’s first foray into end of year performances.   Again utilizing the glamorous space of Crown Casino’s Palms theatre, the audience was treated to roving performers who weaved in between tables and booths while clad in Lady Gaga-esque costumes, giving the night an air of cabaret.

The first half of the performance centred around a story not entirely dissimilar to the Seven Deadly Sins.  A rowdy group of dancers milled around a large table at the back of the stage as though at a dinner party, while a narrator told the stories of individuals who revealed their secrets through dance.  While some pieces such as Addiction and Depression teetered on the brink of being too literal and a little trite, the piece worked well overall.  Some moments were quite inspiring and some were utterly devastating in their emotional portrayal.  An absolute highlight was the presence of Jess Quinn, a third year student at Ministry and a recent finalist on Australia’s Got Talent, as one half of Team Rocket.  Quinn is a dancer with extraordinary facility, exceptional ability, a remarkable presence on stage, and that indefinable quality that makes it impossible to take your eyes off her.  Additionally, Tim Barnes was a surprise to see on stage, having been overseas for some time performing on cruise ships.  His talent has been missed locally and as always, Barnes was a stand out.

The night’s second half exhibited dance through the decades, commencing with the 1920s and concluding in the present day.  The spirit and energy of this half eclipsed the first and seemed more fitting for a dance concert.  It was glorious to watch the evolution of dance and to see the performers in their element.  The energy of the group numbers was contagious and the audience was clearly having a great time.  Some songs such as Mein Herr from the 1930s and Rhythm of Life from the 1960s seemed to lack some of the verve that I expected and it was only in those brief moments that I remembered that it was a school concert I was watching, not a professional company.

With A Century of Secrets, Jason Coleman has reaffirmed his ability to put on a cracking performance, and has shown that Ministry of Dance has training of the highest calibre, with many of the school’s dancers set to have bright futures on stage both locally and abroad.