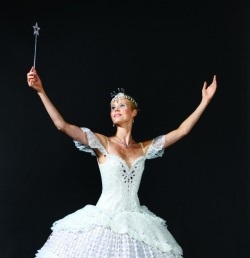 Perfect family fare, Cinderella is an excellent introduction to ballet for children, and WA Ballet’s rendition was a good, very serviceable production that had the packed audience entranced. I attended the matinee, and there were masses of little girls, dance teachers and grandmas who absolutely relished the show.

The ballet told the standard fairytale of poor Cinderella being horribly ignored and abused by her stepmother and stepsisters. Set apparently in the 1930’s, or thereabouts, the ballet began with Cinderella’s mother’s funeral, with everyone in black .The adult stepsisters were shown as beautiful on the outside, but dark within. This version conflated Cinderella’s real mother and the Fairy Godmother. The Fairy Godmother was assisted by garden nymphs and the characters of Faith, Hope and Charity who were three male dancers in spectacular costumes of blue, red and green.

For touring purposes a recorded Prokofiev score was used, accompanied by Allan Lees’ ravishing sets and costumes. Much use was made of a romantic, glowing full moon and Cinderella’s carriage was light, airy and filigree silver, complete with a couple of tiny attendant cupids! The dresses worn by the ladies for the Ball scene were beautiful and the sparkling silver and white tutu of the Fairy Godmother was worthy of Tsarist Russia. The way the long skirt of Cinderella’s white dress at the Ball rippled and fell flowerlike was fabulous.

Technically the dancing was excellent. Jayne Smeulders devised a work (her first full length) that impressively combines contemporary and classical ballet, using pointe and non-pointe work. It also particularly emphasised the female characters. There were allusions to Ashton’s iconic work and his A Month in the Country, especially at times with the fiendishly difficult, fiddly footwork and batterie.

As Cinderella, Anna Ishii was charming and delightful. We empathised with her from the beginning. She is a terrific dancer and performed some mesmerizing solos. She was believable both as the meek, downtrodden family servant and as the rapturous, unexpected princess-to-be who captures the heart of Prince Charming.

As Cinderella’s mother/Fairy Godmother, Fiona Evans radiated love, sweetness and appropriate authority in her battle against evil. Tall and distinguished, Benjamin Marett played Cinderella’s quiet, loving and disastrously henpecked father excellently. There were some very fine duets and trios for Cinderella’s stepmother and sisters and they had a wonderful time being horrid to Cinderella, hamming it up slapstick-like and display great comic timing.

As Prince Charming, immaculate in white and gold, Daniel Roberts was splendid. He is a fabulous dancer who coped easily with the difficult, strenuous choreography. He was full of the rather stereotypical poise and the elegance required for the role. The final pas de deux for Charming and Cinderella was joyous and enchanting, and had the audience cheering.

Prince Charming’s two younger brothers played by Mark Dennis and Andre Santos, were also very fine dancers, debonair in burgundy jackets. This company has some magnificent male dancers but the men were possibly under utilised in this production.

West Australian Ballet’s Cinderella was a charming, delightful performance for all the family.