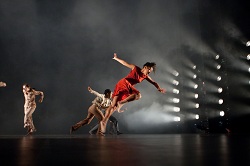 When, as the ushers check your ticket, you are handed earplugs, you may experience a mix of excitement and trepidation.  Then, when the show opens with the jaw-dropping depiction of a samurai warrior sacrificing himself, you know you are in for a ride that will be engraved on your retinas for some time.

After a standout appearance at the 2009 Melbourne Festival, Hofesh Shechter was back this year with his first full-length work, Political Mother.

This is a total immersion experience for the audience; a powerful blitz of live music, dance, and striking imagery. With his uncommon duality – being both composer and choreographer – Shechter has created a show where the music and dance are not only equally compelling and equally central, but integral to one another.

The music is brutal; thrashing between hard rock and military drumming. Rather than simply being placed on stage, the musicians have an intense visual presence. The rock band, elevated above the rest of the action, is shrouded in haze, with the players evenly spaced and lit from below. Between them and the dancers is a sinister line of often faceless drummers, stern and upright, with the brass buttons on their uniforms gleaming in the dark.

The dance itself is constantly moving; the feet shambling and shuffling, the floor patterns looping intricately, mathematically organised. The arms are very expressive, but never fully extended. They are strung aloft by the wrists, or cradled in what sometimes seems like self-defence, sometimes submission, sometimes weariness. It is emotionally draining. We feel the performers clinging to near-shredded hope, always moving forward though close to exhaustion.

Tying together and somewhat brightening all this darkness is a strong sense of community, which seems to empower the individual. Shechter has interwoven traditional folk dance with his own contemporary vocabulary to comment on the way humanity deals with the pressures of modern life. The result is surreal, but also hyper-real, with a timeless, universal quality. Political Mother reels you in, envelops you and takes you on an intense voyage through worlds colliding.