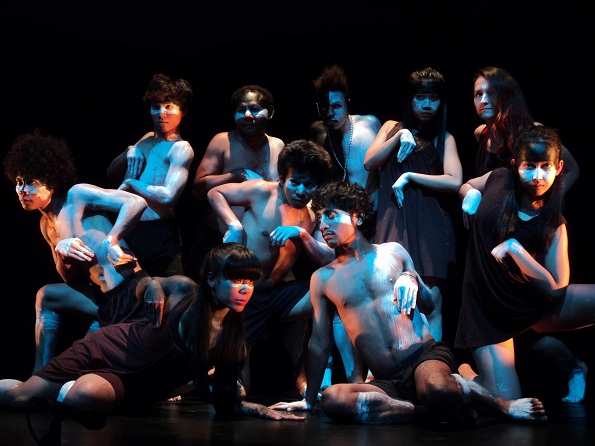 Indonesian choreographer Jecko Siompo’s Melbourne Festival offering, We Came From The East, is a light-hearted exploration of the roots of hip-hop. “Hip-Hop was born in Papua, you don’t have to believe me, but my great grandmother told me,” says Siompo. Starting with this simple premise, Siompo traces the journey hip-hip may or may not have taken from Papua, through Indonesia and finally to New York.

Performed in Siompo’s trademark “animal pop” style, this piece is nothing if not energetic. It’s a frenetic blend of contemporary and tribal dance styles infused with the shuddering movements, screams and yelps of wild animals set to a lively and highly percussive soundscape. The ensemble dancers handled the fast-paced choreography reasonably well, whilst the acrobatic displays of the male performers added an extra physical dimension to the piece. The popping and locking sequences were less well-executed, perhaps owing to the different backgrounds of the dancers, though this did not prove a major hindrance to the overall design of the choreography.

The piece could, however, have benefitted a great deal from a stronger conceptual direction. The overarching theme of the show was hinted at only briefly, most explicitly in a vocal mosaic of interviews and musings on the origins of hip-hop. In the final scene, the dancers donned bright-coloured jackets, marking the arrival of contemporary hip hop; how we got there, however, remains a mystery. Meanwhile, a few odd quips and some seemingly out-of-place references to Pinocchio only further obscured any insights to be gleaned.

The choreography also suffered from a lack of light and shade. There were indeed signs of progression throughout the piece; the heavy use of floor work in the initial stages of the performance was replaced by more upright passages, the plain costumes and heavy tribal body paint was balanced by the contemporary final sequence. The dancers’ verbal passages progressed through several different languages, presumably Papuan and Indonesian dialects, through to English. Nonetheless, Sempo’s choreographic style proved somewhat limiting in this respect, at times becoming overly repetitive.

Soloist Jakob Yaw, stunningly painted half in black and half in white in perhaps a nod at his heritage, performed his role with strong presence and assurance.

The shortcomings of this production were ultimately minimised by Sempo’s playful, joyful approach to this piece. We Came From The East is a show to be embraced not for its profound insights nor its technical wizardry, but for its most basic contribution as an energetic and uncomplicated tribute to the ever-evolving and awe-inspiring world of dance.