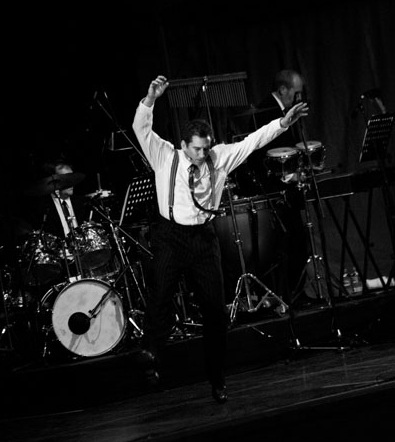 Chris Horsey, on top of being tap royalty, is one of Australia’s top choreographers and performers. He is a major voice in the revolution of tap dance across the world. Horsey has recently been announced as the new Artistic Consultant for the Northern Tap Company in the UK.  His career has seen him travel the world and he has won numerous awards for his work. His dance company, Tap Works, has performed in many dance events throughout Australia and appeared on the very popular television show Gotta Dance in the UK with Adam Garcia.

Now Chris Horsey is putting Sydney back on the map for tap with his new professional full time course, specialising in tap dance. This is the first course of its kind in Australia, if not the world. I recently had the opportunity to chat with Chris to find out more about the Tap Works Professional Full Time Course.

Tell us about your career as a performer and choreographer.

I trained in all forms of dance. There was a turning point in my life at about 17 or 18 years of age when I auditioned for Cats and 42nd Street in the same month and got both jobs. I had to decide which one to do, and I chose 42nd Street.  That really set me up for the rest of my life, in what direction I was going to go. I have always loved tap dancing, but that’s not to say that I haven’t worked in other areas quite successfully.  I was in the original cast of Chicago, which I auditioned for in New York, and I did West Side Story, which is a fantastic show to do. As I’ve got older I have really started to specialise in tap dancing and have enjoyed being a part of and a co-founder of both Hot Shoe Shuffle and Tap Dogs, which have been two of the most successful tap dance shows that Australia has offered. Now I am very much interested in working with tappers and exploring different ways of tapping, different angles, using technology and narrative, and modernising tap dancing.

Tell us about your new tap course. What can a future student expect from the course?

The Tap Works Professional Full Time Course is for those who are passionate tappers. The course will develop existing skills and the curriculum will focus on taking those who have learnt a syllabus and developing them by exploring the different styles of tapping that there are, like Broadway, Hoofing and street tap jamming. Students will also study the history of tap to widen their knowledge. Another important part for the course is to develop teaching skills, as there seems to be a lack of tap teachers around that have done more than just learn syllabus. I think that’s important for the future of tap dancing and the future of dance schools. Syllabus is very important, but what my course will do is serve as an addition to syllabus work and develop performance skills. The only way to develop performance skills is to practise them and there aren’t many places to do that for tappers. If you’re a hip hop dancer, ballet dancer or contemporary dancer there are lots of companies you can join that will give you experience in performing those genres, but there really isn’t anything for a tap dancer.  This course will provide that place. It will get tappers on their feet four days a week, so they are constantly practising and honing their craft in different styles. We will also generate gigs. I have three gigs lined up next year for the company. The course will give the students the experience of working as a dance company, but in tap shoes. We will constantly work toward new performances and new ideas.

Will you be doing other styles in the course other than tap?

There’s one thing I have noticed with dancers I have auditioned for shows, gigs and corporate acts over the last 20 years. There are some fantastic tappers out there, but it seems that a lot of them have really only concentrated on tap dancing and they don’t have the  core dance  skills  required to perform my choreography and  Broadway  tapping choreography. They don’t have classical skills, or hip hop skills, which are both very important to be an interesting tapper. So I have scheduled in 1 ballet, 1 hip hop and 1 jazz class per week and also a precision and music theory class. I am working on a program with a drummer. We are putting together a 1 lesson a week course.  It’s important as a tap choreographer to learn to work in different time signatures and to play with the beat, same as a musician would with a song. On top of that it is important for a tapper to learn how to jam and dance solo.

Are you the main teacher of the course?

I am the Artistic Director of the course and I will be teaching 2-3 classes a week. I am in the process of compiling a list of very impressive dance teachers who are willing to teach, including Darren Disney, Caroline Kaspar, Amanda ‘Foady’ Foad, Thomas Egan, Tracey Wilson, Mitchell Hicks and Shane Preston. Winston Morrison and Grant Swift from Melbourne Tap Dance have been very supportive and will be coming up from Melbourne to Sydney to teach their own, very unique, style of tapping. We will cover all styles of tap.

Do you feel this course is a tool that will reinvigorate tap in Australia?

It is a tool to reinvigorate the market. I think tap dance does come and go – it always has and always will. But I think with such a strong emphasis now on the performing arts it’s definitely needed. Dance is in all forms of media, such as movies and TV shows, but tap hasn’t been a part of it much, but it will be one day. I think this course will add to the cultural stew. There is room for this. The only reason it is not already here is that this hasn’t been done yet, but I’m doing it.

Is this course good for a student who has taken full time dance already, as an additional specialist course?

Yes!  But I think if you are really interested in tapping it doesn’t matter what age you are. You can come do this course. It’s not exclusively for people trained in syllabus, for those who have done full time dance, or for young teens. It’s for anyone who is passionate about tapping.