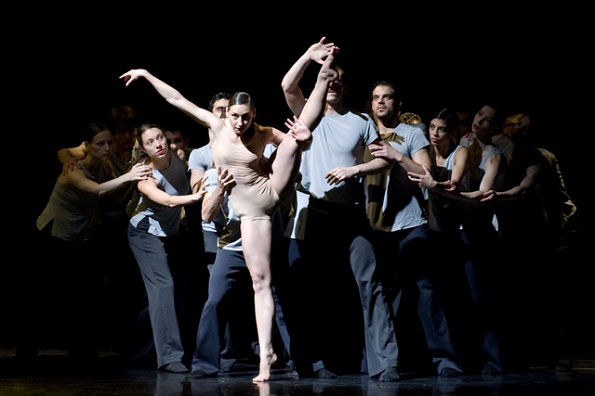 Fourteen years after their last visit, the incomparable Nederlands Dans Theater came back to Australia, for an exclusive season in Melbourne. With a diverse triple bill, this was easily the most fulfilling dance experience I’ve had, and am likely to have, in a long time.

The programme opened with Double You, performed with breath-taking precision by Bastien Zorzetto. Choreorgraphed by Jiri Kylian, it embodies the style which the Czech master made synonymous with Nederlands Dans Theater, and with his own name. It explores themes of self-doubt, both psychological and physical, and of dealing with the passage of time. Upstage, two giant pendulums swing quietly, their size suggesting domination, their gradually waning energy reflecting the cycle of life.

The second work was The Second Person by Associate Choreographer, Canadian Crystal Pite. An ensemble piece for 22 dancers, it provides a wonderful contrast to Kylian’s opening solo. Pite has created a highly theatrical yet powerfully human world using a voiceover, a stormy backdrop, an eclectic soundscape, rat-race costumes and – in the words of Artistic Director Jim Vincent –  ‘miniature humans’. Immediately we are drawn in, and immediately we know that this is a piece about us; that although we are unique, we are part of collective. While various solos and duets bubble out of the mass of grey suits, the mass itself develops and envelops like a storm cloud. The closing imagery, where the individuals finally unite and harness a collective intuition, flowing in harmony, is one what will stay with me.

Closing the evening was Lightfoot Leon’s Silent Screen, inspired by silent movies. I can comfortably describe this one as an epic saga – a thoroughly engaging one at that. It is a journey through a lifetime, through the course of a relationship, and through time itself. It is bookended by a beautifully made, primarily black and white film, in which the dancers seem to be characters. Paul Lightfoot’s and Sol Leon’s daughter features both in the film and, by representation, in the choreography. Lightfoot said, ‘Saura was six then and we both felt like her state of innocence was changing, her consciousness, and that’s what we wanted to explore in the piece – changes of states of being, growing older with someone’.

Silent Screen is set mostly to Phillip Glass’, Glassworks; a perfect choice, with its constantly forward-driving rhythms and a hypnotic melody which seems to embed itself in the listener’s consciousness. In a particularly memorable moment, a man and a woman emerge from the orchestra pit and move upstage. As they travel, the woman’s dress trails behind her, covering the entire stage, until suddenly, the featherweight silk is billowing, brought to life by some hidden wind.

The three works in this programme were linked by anthropological themes, giving the evening a sense of cohesiveness. As Vincent said, ‘This is a pretty clear and somewhat perfect cross-section of the company today. It maintains the history, respects the tradition but it also looks to the future of the company’. Performances from all dancers were, not surprisingly, flawless – these truly are some of the best dancers in the world. Let’s hope this magnificent company return to Australia soon.