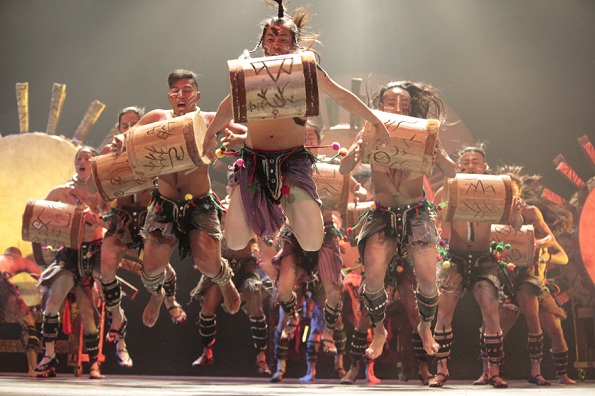 From a touristy/ethnographic point of view alone this show is fascinating, giving us a glimpse of various Chinese dances we would normally never get the chance to see. At times eerie and mysterious, The Legend Of Shangri La is mostly bold, vibrant, noisy and colourful, with some hypnotic, powerful drumming in Act1 and lots of singing and folk dancing in lines by huge ensembles.

This show is the official opening production of ‘The Year of Chinese Culture in Australia’. Chinese superstar Yang Liping, the company’s artistic director, choreographer and principal dancer, was born in Yunan and wrote quite informatively in the bilingual programme about how she spent more than a year researching the folk dances and songs for the show.

The show opens with the rising of the sun and a creation legend, then takes us on a journey through various areas and climates of the province and on the way looks at some of the dances performed in various areas by different peoples of the province. We are taken from desert to snow in a stunning section called ‘ Pilgrimage’ that among other things features not only Tibetan Long Horns (unplayed) but some incredible Buddhist masks and costumes that are breathtaking. There is a ‘stomping dance’ where the dancers do exactly that in gender defined lines. For one dance we are solemnly informed in an English voice over that the dancers made the costumes themselves and it took a year to do so. The multicoloured, heavily embroidered costumes are superb as is the very effective lighting by Sun Tianwei. In the ‘Tobacco Box Dance’ the dancers use boxes like castanets and become dragonflies, ants looking for food and other sculptural forms. In ‘Pilgrimage’ there is a wonderful section of rhythmic dance with long red ribbons /scarves. In other numbers the huge lines of colourfully exuberant dancers weave in and out, up and down or side to side, and split and form small groups and circles in huge waves of traditional folk dance movement, performed with precision and verve. At times parts are almost Priscilla Queen of the Desert like, at other times there are small almost break dancing solos or Michael Jackson like choreography. However, the stage is not at times quite big enough to hold the huge number of dancers in the various ensembles, with some of them spilling onto the side steps where necessary. This was quite awkward.

Yang Liping is featured in two dances. In the first half she performs a moon dance in silhouette, mermaid like with a long skirt emphasizing ‘The Feminine’. Choreographically it is full of rippling arms and at times you could see a Graham and possibly Ailey influence. She also spectacularly performs at the end of Act 2 with a ‘Spirit of the Peacock’ dance. Her almost impossibly articulated arms ripple, fly, whirl and become the head of a peacock. Ethereally beautiful, she has a proud, erect yet sinuously curved carriage of her body in this work. As in many romantic ‘white’ ballets (think Swan Lake, Giselle) she is later joined by an ostentation of other peacocks in stunning parade. There are some exciting, quite effective ultra-violet lighting effects here and a wonderful unexpected visual coup de theatre to close the show.