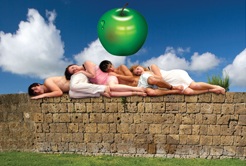 The piece tells the story of Ariel, “a heartbroken young girl who carries the weight of the world on her shoulders.  One night she experiences a lucid dream, where she discovers she is able to manipulate anything she desires, and has the courage to face her mysterious fears.  After her night of adventure, Ariel wakes to see the world through fresh eyes, with the knowledge that when you combine your waking, rational abilities with the infinite possibilities of your dreams, the world is your oyster.  They say that dreams are only real as long as they last; couldn’t we say the same thing about life?” 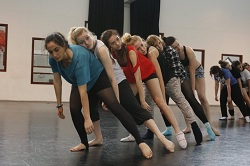 A synopsis such as this made me nervous, as it was doing the one thing that contemporary work fails to do on most occasions, and that is to tell a detailed story.  The tale of Ariel was particularly tricky given that a young girl was apparently capable of experiencing heartbreak and the burden of the world’s weight.  Lauren Thomson was cast as Ariel, and had the difficult job of bringing Rain’s character to life and telling the story without appearing trite.

The Dream Machine opened with an amusing take on the daily bus commute with a cast of colourful characters, my favourite being the sleazy drunk guy that we’re all familiar with.  It became apparent early on that Thomson was perfectly suited to the role of the tortured lead protagonist.  She had a wonderful presence on stage and brought genuine maturity to the character, and from a technical point showed grace and some beautiful lines.   The dream sequence was mesmerizing – a pas de deux took place downstage while the corps moved in the background like the subconscious, seen but unnoticed, felt but untouched.

The piece was quite busy, with much taking place on stage at any given moment, but it slowed significantly when the corps took to their knees in a line basked in a shaft of golden light.  As each dancer raised their hands above their heads, their hands were illuminated by the light, creating an ethereal effect.  It felt like the moment when a plane reaches cruising altitude and everything becomes quiet and calm, almost like floating.  At this point, Ariel began to interact with her subconscious for the first time, eventually commanding it.  At last, she had become the manipulator and was in control.

The Dream Machine gave the young cast the opportunity to develop characters and explore new ways of moving while performing on stage in front of a supportive audience.  Francis’ task was no easy one, but she created a piece that was complex yet very enjoyable to watch.  Her strengths as a choreographer lie in creating movement that tells the audience something while remaining beautiful and pure.  She combines bodies and movement into something greater than the sum of their parts.  Congratulations must go out to Francis, and the young dancers who executed the piece well and showed great enthusiasm and energy on stage.  Paul Malek’s Project Y deserves the industry’s support in order to continue to foster young dance talent.