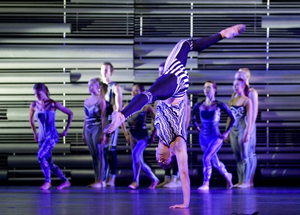 Under the Artistic Direction of Brett Morgan and Teagan Lowe, and with a core of ex-Sydney Dance Company dancers, our expectations of Mod Dance Company (MDC) have been extremely high.

The much anticipated premiere production Suite Synergy, created by veteran choreographer Graeme Murphy, is a fuse of two of Murphy’s earlier works, Synergy With Synergy (1992) and Free Radicals (1996). While Murphy’s work is as masterful as ever, for a brand new company I would have liked to have seen a brand new creation, especially for the already attentive audience MDC has.

The common thread that links each piece in the showcase-style format of the production is the percussion, led by Musical Director Michael Askill. The music isn’t merely just accompaniment to the dancing but is an integrated part. The percussionists are at times positioned centrally on the stage, or suspended above it, and at other times they use the dancers themselves as instruments.

Performances were shaky during the first few numbers, however in the second act the dancers seemed more sure of themselves. Caleb Bartolo stood out for his electrifying solo, Thumper.

With bums already in seats, MDC have a huge advantage over other fledgling companies. I’m looking forward to seeing what they do next.