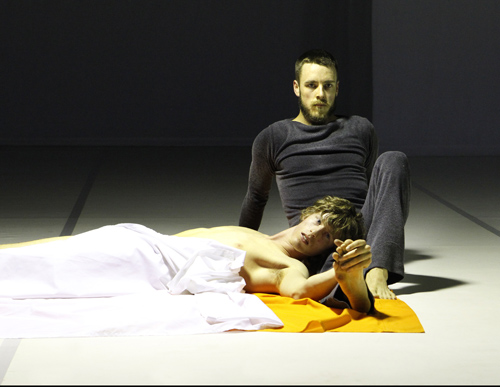 Phillip Adams has revived his signature work, Amplification, as part of the second Dance Massive festival (March 15-27th). In this 1999 classic of Australian contemporary dance, Adams isolates the 1.6 seconds ‘disassociation’ freeze time experienced during a car crash at the moment of impact.  Through it, he and his performers explore the limits of the human body, death and more with morbid fascination.

The work opens with ear-shattering intensity. The dancers, costumed in long, grey jump-suits writhe, thrash and throw each other around Australian design team Bluebottle’s uncompromisingly minimalist set, decorated only by the flickering of overhead lamps and changing hues of stage lighting.  Amplification reveals itself in several distinct sections, each separated by a total stage blackout. Harsh, physically intense movement sequences are counterbalanced by more vulnerable, reflective, and coldly scientific performance tableaux in a manner which lends the work a dynamic harmony of opposites.

Much of the energy of Amplification can be found in the live turntable composition by DJ Lynton Carr, who welds together such disparate sounds sources as classical music (including Stravinsky’s famous Rite of Spring), voices from film, popular music and everyday sounds including, of course, crunching metallic sounds of a car crash. Powerful, if occasionally ear-splitting, it is hard to imagine Amplification without its score. The stark set design is also particularly suited to the work, leaving the mind without anchors on which to grab hold. 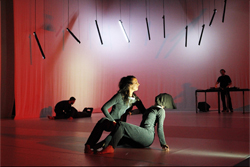 Developed through research conducted at a hospital emergency ward and the Melbourne morgue, Amplification is, unsurprisingly, bold in its exploration of death. The props alone are confronting; body bags, faces hidden under black sacks, and body trunks immediately trigger our personal responses to, and fears of, dead bodies. In one scene, two dancers released from their body bags play at being dead with their eyes seemingly frozen open during a fatal impact. Their bodies are manipulated and coldly examined by jump-suit clad dancers whose clothed forms contrast with the naked vulnerability of the ‘dead’ dancers.

Indeed, the contrast between naked flesh and full costume throughout the work is one of the most successful aspects of this restaging. Whilst the dancers’ frequent nudity is viscerally human, in their uniform grey of their costumes they take on the visage of embattled crash-test dummies. At other times, by simply altering their movement quality, the performers take on the appearance of forces of destruction, perhaps even Death itself.

Conceptually, many ideas are put forward in simple but effective ways.  The simple act of cutting entangled lines of tape in one scene, for instance, proves a highly effective metaphor for the fragility of life. However, Adams relies on these strong final gestures perhaps too often, and the result is that some sections appear to drag on longer than is necessary to make his point. This is especially true given that they often express the same point about life’s vulnerability, and this detracts somewhat from the otherwise truly effective structure of this piece.

This criticism, however, should not take away from a work that has clearly stood the test of time. It is with much pride that BalletLab, and indeed Australia, can claim a home-grown classic that still contains much to excite and confront audiences.