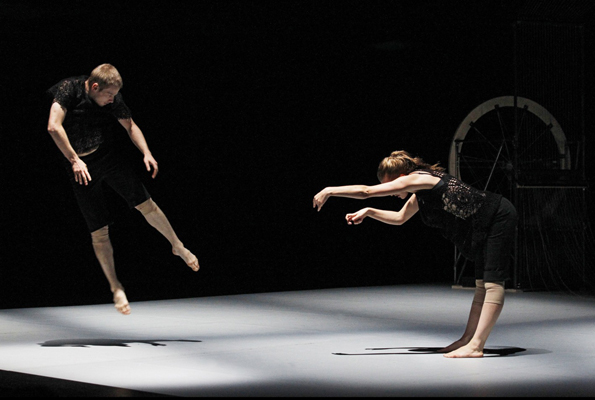 Connected, by Chunky Move is presented at The CUB Malthouse Theatre, Melbourne as part of the Dance Massive 2011 Season.  Obarzanek’s recent work (Glow, Mortal Engine) investigates spectacles that arise as a consequence of the movements of the performers.   In Connected, possibly Obarzaneks last work on the company, the performers animate a kinetic sculpture designed by Reuben Margolin.

Never work with children or animals – or sculptures – it seems, if you don’t want to be upstaged. The first section of Connected is dominated by the promise and magnificence of the sculpture. The potential kinesis of the sculpture immediately establishes a dramatic tension – how will it move?  Even without any animation the austerity of the sculpture is mesmerising, exquisitely lit by Benjamin Cisterne. Multiple strands of gold threads extend across the space, threaded through steam punk wheels and pulleys, to hang from the roof suspending a mobile. The performers alternate between building a section of the suspended mobile of the sculpture and riffing on motifs of connectivity in dyads and triads. Highlights of these dances are the abandon of Harriet Ritchie and the sensuous work of Alisdair Macindoe. The performers eventually harness themselves to the sculpture. Whilst connecting performers to the sculpture was at times cumbersome, the resulting movements were enthralling.  Once harnessed, the sculpture responds to the dancers movements, and begins to take on the nuances of human movement. This spectacle culminates in a duet between Macindoe and Palomares, in which the sculpture, harnessed only to Macindoe, becomes a symbol of the relationship between the performers.  This duet ends with the sculpture being set to undulate automatically above the dancers, submitting to life as an object once more.

In part two of Connected, a series of monologues, the first delivered live by Lake, followed by voiceovers by actors, tell of an artwork being stolen from an exhibition.  This drama is told from the perspective of the security guards that work at the gallery, who are represented by the performers. A gestural score of guards at work morphs in and out of motifs of connectedness. The guards improvise the timing of movement scores in response to each other. The missing artwork is discovered in the rubbish and an ironic debate over what can be called art and the place of art ensues.  This theatrical display, whilst humorous and reflecting our relationships (connections) to art, is somewhat awkward in the presence of the elegance of the sculpture undulating above.  The guards strip back their uniforms and return to the abstractions of dance in kaleidoscopic entanglements reminiscent of Busby Berkeley, until the sculpture lowers to hover over a network of intertwined limbs completing the connectivity motif.   This final image contains the unique power of Connected; the mirroring and mimesis between the sculpture and the performers.