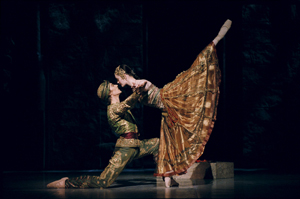 Talk about opening a can of worms.  With the release of Jennifer Homans’ book Apollo’s Angels, which charts the history of ballet, has come a flurry of debate about the epilogue included at the end of the book.  In it, Homans suggests that ballet is either dead or dying.  Such a statement is sure to inspire a response from ballet lovers, dancers, and students alike whether that response is a wise nod of agreement or a furious rebuttal.

“After years of trying to convince myself otherwise,” Ms. Homans writes, “I now feel sure that ballet is dying.”

The crux of Homans’ argument centres on the idea that pieces like George Balanchine’s Divertimento No. 15 have become trivial and no longer have the ability to move audiences.  While many works of art fail to survive the passage of time, in the instance of classical ballet and modern ballet pieces that have lasted for decades and are still being performed and enjoyed to this day, it is not the piece which has become trivial.  It is the audience’s exposure to newer works, greater technique and more impressive staging of productions that has changed the way we view the older works.   Choreographer, dancer, ballet master, and director Robert Kelly says, “to say ballet is dying is the same as saying ‘classical music is passe’ or ‘surrealism is dead’. It’s an art form with a wonderful heritage and a rich history”.  Indeed, much like popular songs or fashion statements that were a big hit upon release and are now a source of ridicule and are mostly forgotten, many ballet pieces will be lauded upon premiere and just as quickly dismissed from memory.  They will become dated and trite.  Not every production will become a classic, nor will every performance be memorable.

The Australian Ballet’s Artistic Director David McAllister feels that ballet is alive and well. “There are so many companies around the world creating a myriad of new works that explore the ballet technique and use it in completely new and innovative ways. Productions of the 19th century ballet canon are being updated and presented using 21st century technology and techniques in ways that inject new life for today’s audiences. Young dancers are still joining ballet classes around the globe and dance is being seen by an ever-growing audience thanks to an online world of Facebook, blogs and Youtube.”

Technology is enabling smaller projects to get off the ground, receive exposure and funding.  Where once ballet was seen as an activity for the upper class and entertainment for the elite, ballet companies are reaching out to younger audiences and moving with the times.  However, the high cost of seeing a major ballet company remains beyond the reach for many families, students and adults alike.

Homans neglects to point her assessment of ballet’s vitality to the modern day productions that are wowing audiences, challenging dancers and standing up to repeat performances.  Granted, it is too early to tell whether many, if any, of these pieces will become classics and will ensure the longevity of the art form.   She dismisses contemporary works outright as “gymnastic or melodramatic excess” suggesting that only the tutu ballets of old have any place in the current climate.  Such an opinion sounds an awful lot like the same criticism that was thrown at early rock and roll or Allen Ginsberg’s revolutionary poem Howl.  Groundbreaking art will always have its critics and there will always be an element of adjustment as dance moves forward.  Best it does that than stays stagnant and fades into oblivion.

Certainly, ballet is a structured art form and there can only be so many variations before it stops being ballet, while other forms of dance such as hip hop or jazz can take many different forms and remain true to its origins.  This isn’t a criticism, rather an observation.  Ballet’s structure allows it to remain consistent over time and won’t fall prey to disintegration.  Having said that, in order to keep new and younger audiences who are exposed to such a vast array of mediums for entertainment interested in ballet, it is essential that the art embraces technology and utilises its various forms to engage people.  As our attitudes change towards entertainment, so too must the entertainment itself evolve.  McAllister sees ballet continuing to “evolve and develop to reflect the environment that we live in. In each generation there are people who innovate and bring new ideas and new energy to ballet. Their works add to the canon and their masterpieces become the classics of the future. While it’s important to maintain and present the great works of the past that are the foundation of ballet, it is equally crucial to develop and nurture the choreographers of today to keep the evolution of our art form vital and alive!”

Ballet companies are employing more fashion focused advertising with bright colours, and an edgy take on a classical tradition.  A couple of years ago, San Francisco Ballet had the image of two dancers kissing in the back of a convertible car on their promotional posters.  Many bars and stores put up the posters, which for them was the first dance poster they had ever displayed.  The Australian Ballet’s dancers can be frequently seen between the pages of fashion magazines, as well as sports and other publications.  The idea is to present ballet dancers as sexy, vital and modern, in contrast to the outdated image of them as stuffy, one dimensional and old fashioned.

Despite this, ballet still has limitations in this modern climate. As Sarah Keough from the Washington Post writes, “money problems weigh on ballet like a stone around its neck: salaries, rent, costumes, toe shoes, insurance, musicians, storage and so on. Debt is a big factor in all the conservative programming out there.  But the main problem is this: ballet suffers from a serious lack of confidence that is only growing more and more paralyzing.”  She goes on to say, “there’s nothing more boring than safe, pretty art. Nothing feels less relevant. Ballet needs to think bigger. Yes, money is tight, but ballet here has gotten itself into trouble by aspiring to opera-house prestige without the more stable budgets of its European counterparts. To survive into the future, I think the average ballet company would do better to downsize, aim for excitement, stir the pot — and drop the full-length ballets, which are better left to the few larger, richer operations”.

It’s not all doom and gloom for ballet lovers, however.  With choreographers like Twyla Tharp, Christopher Wheeldon, and Alexei Ratmansky amongst others, pushing the boundaries of ballet and creating works that blend abstraction with classical lines, ballet remains a living, breathing art form.  A glaring omission from Homans’ assessment of modern ballet is American choreographer William Forsythe who turned ballet on its head at the end of the 20th century and challenged dancers technically and audiences intellectually.

The people are telling us that ballet is as essential and popular as ever.  McAllister states that audiences for The Australian Ballet are growing every year, with subscription rates the highest they’ve been since the early 1990s.

Landestheater Coburg Ballet Master and international dancer Griffin Doug suggests that the pulse of ballet is strong in Europe. “I see (ballet) as the only ‘high-art’ that can be relied upon to bring constant houses. With the exception of well known musicals, dance programmes are the normally safe bet for a theatre intendant. Houses may not be sold out every night but performance for performance over a season the dance nights sell more seats than other performances.  For McAllister, however, “it’s not just about seat numbers (but) more about giving audience members a whole ballet experience.”

As Doug points out, ballet has the important asset of being a universal language which allows a production to traverse the globe without the barriers of communication.  And as all dancers can attest, a ballet class can be taken in any language anywhere in the world with little to no confusion.  The language of dance is the same wherever you go.  “Of all the live performance genres, ballet is the most adaptable to change. Dance is easily performed in large and small house settings, also in impromptu and carefully rehearsed productions. Dance can be performed with full symphony accompaniment, but is also accepted by audiences with pre-recorded soundtracks. Far from being a dying art form or a museum art form, dance is alive and well. It is the most adaptable of art forms with the widest audience base.”

Ballet itself is the foundation for all other forms of dance.  A jazz dancer with classical technique is more often than not far superior to someone without ballet training, and the same can be said for musical theatre, cabaret, tap and even hip hop dancers.  With the surge in popularity for dance thanks to the plethora of television shows, movies, and film clips showcasing the broad appeal, diversity and skill of the art, ballet is not going anywhere in a hurry.