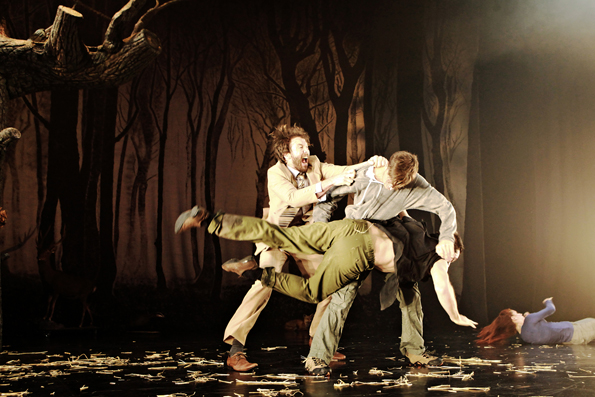 Food Chain is a very interesting and humorous look at a role reversal of humans and animals.  It is a very David Attenborough-like look at humans through the eyes of animals.

The work centres around two bears (two men dressed very obviously as bears), and their observation of human interaction.  There are many different takes on this concept and all are very entertaining. It is a satirical look at the way we behave, and how we too could be categorised in the same way that we do animals. There are many layers of thought to digest within this piece and it says much to both the uneducated theatregoer and the career artist.

Food Chain was created through an invitation from Physical Theatre Collective www.pvc-tanz.de of Germany to work with directors Webber and Millwood. The collaboration brought about a very unique and thought provoking show.  Just like previous works from the same directors (Lawn, Roadkill), they bring together a well written, humorous script and seamlessly blend it with dance, lighting, costume and set. All these elements have an equal role to play within the work, with not one element dominating.

Although Food Chain has a very European flavour (with no nudity sensorship and some very sexual themes), it is also very relevant in its humour to an Australian audience, complete with beer drinking bears talking about the audience. They make the obvious more obvious and there is plenty of laughing at ourselves.

A mix between regular pace and slow motion, and turning the house lights on and off, confronts the audience, making them a little uncomfortable in their seats and encourages self reflection. This is very amusing.  The work literally includes the audience and breaks the 4th wall, but beyond just that, it actually makes the audience completely aware of its own role in the show.

The performers’ skills are quite versatile and they are strong physically and emotionally. At the end of the play they find themselves continuously, slowly falling out of a tree (the centrepiece for the set). This is mesmerising, and it is at this moment that I as an audience member find myself very satisfied and settled – a definitely memorable performance.

Food Chain is thoroughly entertaining. This work is not to be missed at this year’s Sydney Festival.