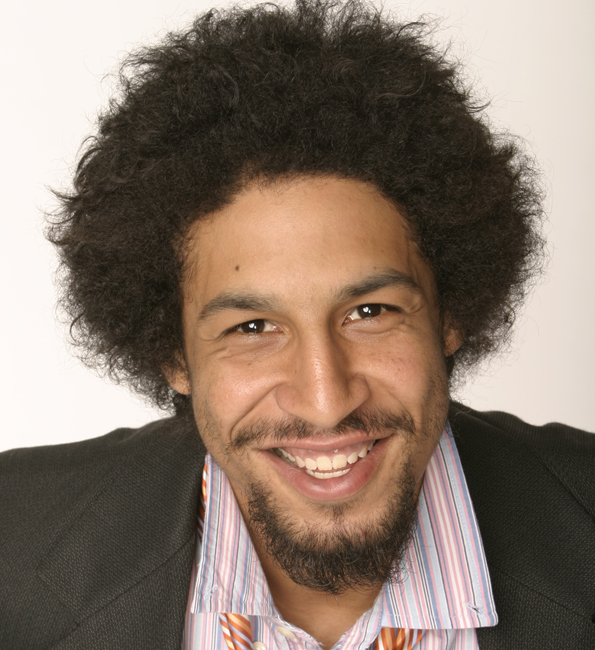 To all the tap dancers who’ve wanted the rhythmic precision and brilliant feet of Jason Samuels Smith, you’re now one step closer!

In a highly innovative collaboration, the Australian brand Bloch, who are experts in technical dance footwear, have partnered with Jason Samuels Smith, one of the world’s greatest tap dancers, to create a professional tap shoe to meet the needs of today’s tap dancer.

It’s taken over four years to perfect, countless hours of research and testing to develop the Jason Samuels Smith Professional Tap Shoe SO313. This beautifully crafted tap shoe is not only comfortable and stylish, it also produces an amazing sound like a well tuned instrument… but don’t take my word for it. You can now try it out for yourself!

On his recent trip to Australia, Jason officially launched the SO313 at Bloch’s flagship store in Sydney. I caught up with him during his whirlwind visit to learn more about this uniquely crafted tap shoe.

As a Tap Dancer, how important is it to have good tap shoes?
The tap shoe is your instrument and it’s an extension of your foot, so it’s very important that it’s made well and has a decent sound that you prefer. It needs to be comfortable enough to wear for a long period of time and stylish enough to be presentable on stage. Tap dancers deserve a good shoe to accompany the art form. Tap dancing is too amazing not to have an instrument that can deliver.

How did your relationship start with Bloch?
Some Bloch representatives approached me four or five years ago at a national tap dance event. They had been keeping track of me and were very aware of my career, and were interested in developing a professional tap dance shoe. I knew I wanted to create a shoe but I didn’t know how I was going to do it, so when Bloch approached me it was perfect timing. They were really open to the idea of allowing me to have full creative say over the design of the shoe, and were willing to make whatever changes I asked. 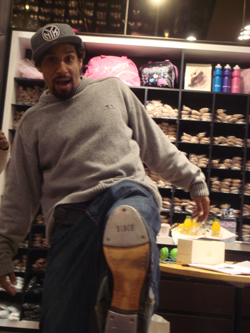 How involved were you with the design of the tap shoes?
I was completely involved. In the beginning Bloch sent me a model of their top professional tap shoe that looked more like a steel-toe boot than a dress shoe. I gave them a shoe that I liked in a classic Hollywood 30’s or 40’s style and once they had the core design we kept altering it.

I had seen a clip of Coles (Honey Coles) and Atkins (Cholly Atkins) tap dancing and they’re wearing shoes that have a straight cut across the toe and the toe is in a different colour to the back of the shoe. I always liked how this looked and so we have done two versions of the stitching for our shoe. One has the hard cut that goes across the toe – that’s the ladies version. The other one cuts across and has a sharper cut that goes to the back. So there is slightly different stitching on the shoes, which gives more options in terms of customisation.

So you have a female version and a male version of the shoe?
Right now we have a basic design for a male and a female shoe, where the sole, the leather and interior are all the same. The female shoe has slightly different stitching but it’s not necessarily gender restrictive. I know guys that have bought the female shoe because it’s a narrower cut of the male shoe. My foot is naturally wide and Bloch designed the shoe based on my foot, so the male shoe that comes out of the box is wide.

What was the most important thing for you working on this project?
The main thing was to create a professional high quality tap shoe as a complete package which to me means a shoe that is a total entity and lasts the distance. We worked on the durability of the shoe and the style, and it was also important that the shoes have their own distinctive sound.

The shoe also needs to be comfortable. If you’re teaching three or four classes a day, your feet are just throbbing by the end of the day. Bloch really attacked this, even before I approached it. Their shoes are some of the most comfortable dance shoes in the world, so I was really happy about that.

Sound is an important aspect of tap. What process did you undergo to ensure the shoes produced an exceptional quality sound?
At the beginning of the whole process Bloch did a focus group. They called in a bunch of tap dancers: Derrick Grant, Michelle Dorrance, Dormeshia Sumbry-Edwards, Chloe Arnold, Dianne Walker, and myself. They had taps from the past and the present and we tested the sound independent of the shoe, and also on the shoe, and every dancer would say which tone they preferred. I was really feeling confident with the shoe and we were at the end of the process when Bloch wanted me to try these new bigger taps that covered the entire surface of your toe to the ball of your foot. The sound was really unique and the tone produced by the bigger tap was so rich, deep and base heavy that I loved it immediately! The sound I can produce with the taps is actually my favourite part of the shoe. 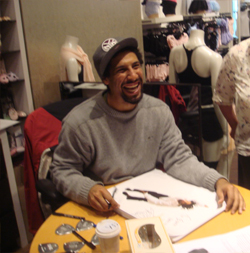 Are the shoes designed only for professional dancers? What are some of its unique features?
It’s a comfortable shoe that any level tap dancer can use. If you’re buying a tap shoe it should come as a tap shoe with taps on it already. With our shoe it’s ready to use straight out of the box, and it doesn’t have a long break in time. It also comes with optional pieces of rubber for the sole of the shoe. I don’t particularly like the rubber because it limits your ability to slide, so we have given this as an option.

The shoe comes with a build up (additional half soles on the toe and heel), which changes the tone giving it a deeper base and helps to balance the bottom of the sole. The build up also gives a richer sound and more versatility, so if you want to use the top edge of the toe, you have more surface area to create that sound or to do a toe stand.

My mission was to develop an instrument that can withstand the force that we use to create our sound. When we’re tap dancing we’re destroying our shoes and tearing them to shreds. My goal was to create a long lasting shoe. We’ve really tried to reinforce the stitching over and over again so people will get the most life out of it. It won’t obviously last forever but I believe in business, if you do the job right the first time, people are going to come back the second time. I also think the shoe will make a lot of tap dancers happy because it’s made for tap dancers by a tap dancer.

What is your hope for the Jason Samuels Smith Professional Tap Shoe?
One of my dreams for the shoe is for every tap dancer on the planet to try them once, and hopefully they will like them and continue to support them. Personally I want to continue to make the shoe better like we have done over the last four years. I want people to give me feedback because it’s not about what I want, but about what we (the tap community) want.

To get your pair of Jason Samuels Smith’s Tap Shoes SO313, contact your nearest Bloch retailer by visiting www.blochworld.com

Jason Samuels Smith’s tips on buying Tap Shoes
1. What are you are trying to accomplish in your tap shoes?
Are you buying them to perform, teach, practice, or because they look nice?
If you’re a teacher and you teach sixteen classes a week you need something that is comfortable and immediately feels good. You should never have pain when you start wearing a pair of shoes and you don’t want to have to break them in. If you can feel your toe at the tip of the shoe and it’s uncomfortable, then it doesn’t fit and you need another size. It’s got to be comfortable!
2. It has to produce a sound you like, so you need to test it out on a wood surface to get a feel for the sound.
3.  It needs to look good. But it doesn’t matter how it looks, if it doesn’t sound or feel great.