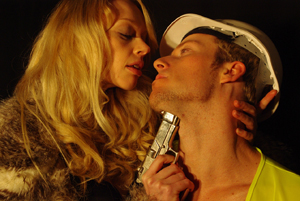 Three out of four works I’ve seen by Paul Malek this year feature death as an element or central theme. If I didn’t know him personally as a charming young man, I think I’d be wondering about what kind of person was behind these hyper-emotive, frankly dark productions.

What Malek does best is jazz contemporary with a rich narrative, and Climax sees him further his exploration of this genre. It has less of the philosophical depth of June’s Collection of Forgotten Treasures (which justly cleaned up this year’s Short + Sweet in Melbourne) and is more akin to the series finale in a top notch American television drama. Let’s liken it, to say, an X-rated Desperate Housewives doing a ‘seven deadly sins’ special. This is the kind of show you would bring a culture-phobic acquaintance to in an attempt to initiate him or her. It appeals to the mainstream appetite for show-stopping entertainment without compromising itself artistically. These themes are nothing new, but they work; murder, adultery, revenge, drugs, rape, suicide and hate crimes. How else do we explain the dizzying number of crime shows on TV?

The music, lighting, and choreography in Climax are bold and confronting from the get-go, with inter-connected storylines to match. Call me nearly 30, but I would have enjoyed more respite from the thumping electro-pop break beat, though it definitely serves the purpose of creating tension, suspense and that ‘in-your-face’ vibe.

Performances are first-rate all around, delivered by a cast of some of Melbourne’s finest, and quite possibly sexiest, contemporary and commercial dancers. The question arises as to whether or not there is an end to Ashleigh Perrie’s skill. I suspect probably not. The woman is fearless. In Climax she performs lightning quick, acrobatic moves, in heels and  a pencil skirt, atop a small desk without so much as a shiver of instability. I got the feeling that we could have decorated the desk with olive oil and marbles and she’d still have pulled it off with rock solid perfection. Did I mention she was in heels?

Someone (possibly Calvin Coolidge, but even Google doesn’t know everything) once said something along the lines of ‘there’s nothing more uncommon than an unsuccessful person with talent’. What I admire most about Collaboration The Project is the fact that it exists. It is prolific, and continues to strengthen with each output. There’ll never be enough work for the amount of talented artists in Australia (and indeed, the world), so when it comes down to it you sometimes just have to go out and make your own. These guys are proof that it can be done. Bravo to them!