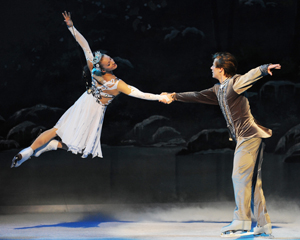 The Imperial Ice Stars have become familiar faces in Australia with their renditions of classic ballet favourites. In August we saw the European and National Championship Skaters back with Tchaikovsky’s Swan Lake on their two year world tour.

The Lyric Theatre at Sydney’s Star City was filled to capacity with young families (as expected) and the elderly, as well as a significant number of young adults, to my surprise. The crowd followed the classic story of Odette, a princess turned into a swan by an evil sorcerer, and Prince Siegfried, her lover. With a rich ballet history, Swan Lake is one of the world’s most famous and best loved traditional ballets, but this time it was being told in skates instead of pointes.

If you haven’t had the opportunity to watch the Imperial Ice Stars, expect a good dose of athleticism, stunning costumes and an on ice interpretation of an old classic.

The ice rendition of Swan Lake has been said to push the boundaries, but I don’t necessarily agree. Yes, a classic ballet has been spun into a contemporary piece for a younger crowd, but what was lacking for me was a fresh interpretation and something different from what we usually see.

However the backdrop, setting and costumes were innovative and exemplary.  The lavish backdrops and scenery were designed by Australia’s own leading scenic designer Eamon D’Arcy. Albina Gabueva’s costumes did not disappoint either, with intricately cut, layered, and fitted outfits that allowed each skater the freedom of movement to perform the most complicated of steps.

All in all, the Imperial Ice Stars created a great visual treat for the eye, yet even with such a brilliant display of technical precision and athleticism, I’d rather watch Swan Lake performed in ballet.