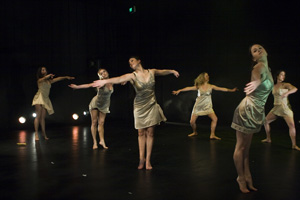 First up was Adam Parson’s Kalahari Sunset for The Space full time students. This piece drew on the natural elements for inspiration, and had a really nice sense of dynamics and impulse. So many bodies onstage gave a lot of scope for shape and patterning, and with a little more attention to precise unison the effect would have been even more powerful.

The World is Round was an obscure piece of dance theatre. Dancer/choreographers Rebecca Jensen and Emily Ranford played dramatic but baffling games with colourful buckets, pillows and bubbles. It was kind of mesmerising in its weirdness, and the performers were charmingly committed.

In Self, Sometimes Other, Gareth Hart explored the space in what looked like a structured improvisation. The choreography remained on one energy level throughout and for a solo piece it seemed a little too introverted to really engage. When Hart began mumbling to himself I thought he was about to investigate the idea of internal dialogue, though disappointingly this was only a brief interlude.

Top of the night, without a doubt, was Paul Malek’s gothic drama, Collection of Forgotten Treasures. This was the only piece to create interesting characters, tell a story, and thus give the audience a chance to really connect.  Lights, music, costume and intention were cohesive and developed, making this the most professional, well-rounded creation of the evening. No doubt we will have the chance to see this work again in the future. Special mention must go to twelve year old dancer Alexandra Bircher, who more than kept up with her professional co-performers.

Simona Grippi brought some Latin action to the party with Dance the Passion. It was nice to have a change of pace and style, though on the night the performers lacked the polish and precision to really wow the crowd.

Nadia Tornese’s Addicted was a hip hop piece exploring addiction (to drugs, judging by the quite literal choreography). Thankfully Tornese had the foresight to use the movement to explore a theme, therefore setting it apart from many other hip hop pieces which blend into one big music video. Her vocabulary also extends to include some contemporary dance, which was refreshing and made for an original – and in the spirit of the festival – “short and sweet” night.

In Adornable, choreographer Elanor Jane Webber and Chimene Steele-Prior explored the “quiet, innocent and dangerous moments alone spent dressing, smoothing, co-ordinating, and peering into the bathroom mirror”. These two strong, confident dancers made beautiful use of an expanse of white tulle and a black silk curtain to enhance the folding, sweeping choreography.

Deprivation Overload was notable for being the most ‘together’, despite being almost completely accompanied by silence. Choregrapher James Andrews successfully depicted the ideas of sensory deprivation and sensory overload.

Miscellaneous Refuge by Jonathon Homsey combined various dance styles to tell stories of why dancers love to dance. The accompanying voice-overs would have been so much more effective with better recording quality, however this was a light-hearted group number and a warm, fuzzy way to end the show.

The best works presented over the two week festival were selected to be shown again on the final night, and these were: