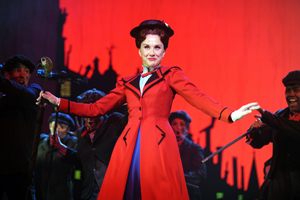 It’s noon at Dance World studios in Melbourne and bright winter sun is streaming through the high windows. Pushed back against the walls are scenery flats of flower beds, an old fashioned lolly store counter, park benches, parasols and chimney brushes. If you’ve any lingering doubt as to which theatrical fantasy (or rehearsal room) you’ve stumbled into, the string of lettering stuck to the wall above the mirror will set you straight: SUPERCALIFRAGILISTICEXPIALIDOCIOUS. It could only be Mary Poppins.

The cast shuffle in, bright and chatty in their rehearsal gear, and a stark contrast to the black-clad, stiletto-wearing media crowd ready to film the preview. After brief introductions, the cast literally burst into a vocal rendition of the famed ‘Supercali’, and, after only a week of rehearsing, are already sounding near perfect. The number ends, and with flawless comic timing Sally-Anne Upton (playing Mrs Brill in the show) exclaims “now it’s the media’s turn – let’s go!”

Next the cast perform the same song with choreography, which is mind-meltingly quick and tricky, and spells out each of the 34 letters in the song title. Later I ask Associate Choreographer, Geoffrey Garratt (who has just come from reproducing Mary Poppins in The Netherlands and, consequently, in Dutch) how the Australian cast compares to others. He replies: “It feels like an original cast. You have to reinvent the show on each company, and work with their strengths”.

If after only a week’s rehearsals this is the standard of the production, you can bet the performance season will be incredible. Mary Poppins the stage show was at least a decade in the making and has been a huge hit overseas, and it looks like our Aussie version is going to be up there with the best.

At the media call I had a chance to speak with Verity Hunt-Ballard, who will be playing the practically perfect Mary Poppins.

What does this role mean to you? Is it intimidating at all?
Of course there’s pressure, it’s such a huge role, and I always loved Julie Andrews as a child. It’s just such an honour and a privilege to get the opportunity, and to also work with such an amazing cast. The directors didn’t want us to watch previous versions of the show  as they don’t want us to try and replicate other interpretations. I think they like that we bring a little bit of Aussie magic to the roles. That makes it that little bit different to other versions. Mary Poppins is such a demanding show.It’s all-singing, all-dancing, all-flying, but I try not to focus on the pressure of the role and just enjoy the rehearsal process  – it’s my favourite time.

One week into company rehearsals, what’s been the most challenging aspect so far?
Every scene has very technical elements in terms of magic and prop work, so it’s been challenging learning those aspects. Also, the sheer amount of information has been a challenge.  Mary is onstage practically the entire show, so I’ve had to do a lot of physical and vocal preparation. I only had ten days off after finishing Jersey Boys, so that was a challenge too.  Although it does mean that I’ve been able to stay show-fit.

Mary Poppins is one of the biggest iconic roles in musical theatre. Are there others on your wishlist?
As a child, Les Misérables was the show that got me into musicals, so I think Fantine would be a lovely role to play. But it doesn’t get much better than Mary Poppins, in terms of musical theatre. I try to always stay in the moment and Mary is enough to deal with right now!

Lastly, you obviously had success in the audition process. What should young dancers remember when going for auditions?
Always stay true to yourself. Don’t try to be someone else, because there’s only one you.  Also, deeply breathe before you go into the audition room.