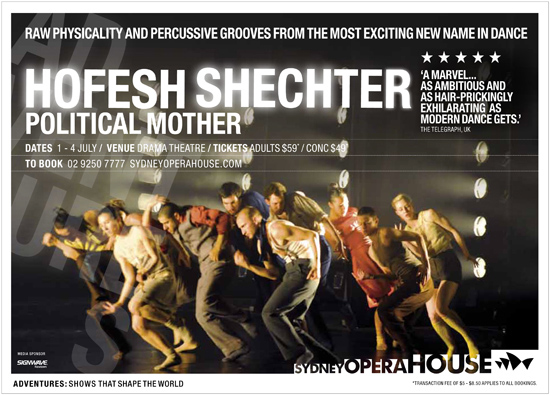 Make no mistake, Political Mother is loud. It is also a vigorous and highly ambitious dance work from the Israeli-born, UK-based choreographer and composer who is astonishing dance audiences the world over.

Performed by ten dancers, Political Mother is militant, powerful and fuelled by real anger. Hofesh Shechter’s puzzle of political indoctrination – of freedom and war, honour and service, duty and sacrifice – unravels in a sensory overload of percussive grooves, electric guitars and the pounding of drums live on stage in Shechter’s own cinematic score.

After the World Premiere of Political Mother in May 2010 at the Brighton Festival, reviewers across the world have been reaching for superlatives: Political Mother has ‘the totality of Wagner and a power like nothing on this earth.’ THE BRIGHTON MAGAZINE.

WIN A DOUBLE PASS!
Sydney Opera House and Dance Informa have 2 double passes to giveaway to the Opening Night of Political Mother on Thursday July 1, 8pm. Simply send your name, age, address and phone number to info@danceinforma.com by June 18th.

NSW Permit Number LTPM/09/00769 CLASS: Type B.
Competitions opens June 10th 2010. Competition closes on June 18th. 2 double pass winners will be selected at random on June 19th at 9:00am EST and notified by email and phone call. All entrants must email all contact details required for valid entry. Tickets will be held at the Box Office of the Drama Theatre for collection by winner on the night of the show. Winners will be published at www.danceinforma.com after they are announced.