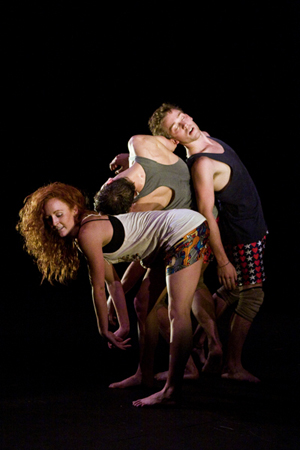 Project Y is the youth-based sister company of Artistic Director Paul Malek’s Collaboration The Project. It Sounds Silly…  is their second work, devised and choreographed by The 2nd Toe Dance Collective, in conjunction with the dancers. With 29 performers, aged between 12 and 22, it’s an ambitious undertaking, but Project Y pull it off with impressive professionalism, no less.

It Sounds Silly… is an exploration of early childhood events. It opens with a schoolyard hand-clapping game which builds into a complicated rhythm, gradually becoming thunderous with the force of 29 pairs of hands and feet. That those hands and feet kept in time for as long as they did at the speed they were going, is an accomplishment in itself.

The company has obviously gone through a lengthy research and development process to draw on memories from their not-so-distant childhoods. What was most touching was that some of the ideas that were dug up were ones that as the audience, we all knew, but perhaps had forgotten we knew, for example the spooky chant ‘In a dark, dark house there was a…..’. This gave a real sense of the universality of being a child, from our fears, hopes and joys, to our jokes and games.

What a great experience for young people, and a fantastic insight into and preparation for both the life of a professional dancer and the process of creation.

The second work, Parkland Avenue, was presented by Collaboration The Project. It is the story of three inseparable best friends, David, Annabelle and Michael. The concept was clever in its simplicity: to tell the story of the demise of a friendship over a decade, through a series of isolated scenes. The storytelling was assisted by video footage and moved chronologically.

The opening scene of Parkland Avenue was an absolute triumph. We met the three characters as young children, pajama-clad, hyperactive and in the carefree throes of an elaborate play-fight. What could easily have been the cringe-worthy acting of adults pretending to be kids was in fact so believable and so infectious I found myself laughing out loud and itching to take part in the delirious giggling heap of ‘stacks-on’.

The subsequent scenes depicted the trio at various stages of growing up blissfully together, while the video projections hinted at some unnamed impending doom. After the initial scene, at times I found it difficult to relate to these characters who were in danger of becoming caricatures of intoxicated cheerfulness. Call me cynical, but the idea of three people being constantly and equally enamoured seems unrealistic. I had to make a conscious mental switch to allow for this fantasy and let myself be swept up in the story. I am quite probably in the minority here, as I noticed a few people in the audience had an untimely attack of ‘the sniffles’ during the final scenes, and we all know what that really means.

Brendan Yeates, Ashleigh Perrie and Matt Holly performed with absolute commitment to the movement, the characters and the story. All are gorgeous dancers: athletic, accomplished and well-matched.

Hats off to Paul Malek and assistant choreographer and member of 2nd Toe Dance Collective, Adam Wheeler, for an inventive and highly entertaining evening. I look forward to more from these two innovative young companies.