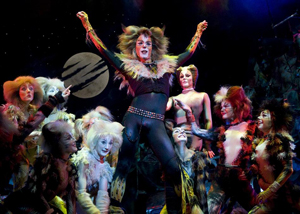 The Regent theatre is magnificent, providing a ‘purrfect’ setting for the musical Cats.

The show still has the same songs and pretty much the same set and costumes. For this production though, there is of course a different cast and some extra choreography, assisting the performers to show off their dancing skills, especially Mr Mistoffelees.

In short, as a musical it was impressive, with some very tuneful voices enabling some outstanding ensemble and individual performances.  The dancing was of a very high calibre with wonderful flexibility, high extensions and dynamic jumps and jetés. With energy, attack and dynamics, the dancers displayed great control with turns, good aerial and acrobatic skills and in general, tight unison from a very talented cast.

But as Cats go, sadly they all left the ‘purring’ behind, making the choreography appear somewhat dated. The cast all desperately need to go to a ‘Cat School’ (as per the original cast). Apart from glimpses of individuals here and there, the only resemblance to Cats were the costumes, make-up and of course the songs themselves. Gone was the individual cat like style that they should possess – the inquisitiveness or the regal aplomb, being somnolent, old and weary, majestic or quick tempered and feisty. They simply needed more cat like shape and movement. I was very surprised to see cats just basically standing around upright throughout the show as if they were on a platform waiting for Skimbleshanks’ train to arrive! 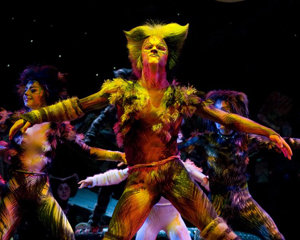 The exception to this was Mr Mistoffelees (Adrian Ricks) who was so set apart from the rest that he was actually upstaging the cast during the singing. His pawing of the rubbish, or the split penché he did while atop the car boot during his “stretch” before settling down, were both eccentric and imaginative. What I fail to understand was why he didn’t sing at all during the show? He was front and centre basically the whole time, yet all he did was poke faces as if he was doing cat sign language. Even if he mimed it would have looked better and no-one would have known.

There were outstanding performances though, with Rum Tum Tugger (John O’Hara) hamming up every little characteristic moment that he could, with assurance and profuse self confidence in a very cocky and humorous way. Rumpleteazer (Justine Puy) was very rascally and playful and her curtain call at the end of the show where she shoved Mungojerrie into the oven, was very cheeky. Grizabella (Delia Hanna) sang superlatively as she hobbled around the stage and I  particularly liked her physical interpretation of the shunned rejected cat.

Munkustrap (Shaun Rennie) sang spectacularly throughout with his ‘cat pose’ being masculine and flattering to his physique. However, he needs to act or tell his story more and not just sing it.  Jennyanydots (Laura McCulloch),for a debut artist, was very swanky and vivacious.

But the scene stealer of the show was the ‘Gus the Theatre Cat’ routine. Gus (Michael-John Hurney) and Jellylorum (Lisa-Marie Parker) were outstanding. They sang brilliantly, were comical, animated, dynamic and bubbly, and they totally had the audience, including myself, in stitches. Honorable Mentions go to Bombalurina (Monique Chanel Pitsikas) and Demeter (Renee Burleigh).

This is an Australian cast and we should all be encouraged to support the arts in this country. By us (the public) attending the performing arts we are assisting in the continual employment of these and other talented artists.