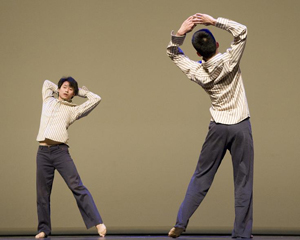 Shanghai Beauty was the first in five productions in the Kenneth Myer Asian Theatre Series – a new biennial program at the Arts Centre.

The director and choreographer of this production has an amazing personal history, which the hype of the show has been built around. Jin Xing, meaning ‘golden star’, was born during the Cultural Revolution. As a young boy, Xing went on a hunger strike to convince his parents to let him take ballet lessons. He spent many years in the People’s Liberation Army’s dance company, before dancing in New York and Europe with some of modern dance’s biggest names. Xing has won many awards and grants for dancing and choreography. At the age of 26, Xing undertook gender reassignment surgery, becoming the first transsexual to be recognised by the Chinese government.

If I’d known nothing of this interesting history, perhaps I would have found the show more fascinating. Being lucky enough to meet and interview Xing before the performance, and finding her to be inspiring, articulate and perceptive, I was doubly intrigued. Ultimately, I expected more, and was disappointed in the lack of depth conveyed in the choreography itself.

The performance began with a video of Xing being made up and dressed in a traditional Chinese costume. The sped-up transformation into character was interesting to look at, and a fairly obvious expression of the themes of beauty and identity.

The choreography itself consisted of several shorter pieces strung together, with no breaks in between. The mix of music was eclectic – from solo piano to full orchestra, to drum and bass, to a complicated rhythm piece accompanied by the dancers themselves.

Throughout, the dancers were beautiful, athletic and versatile. Full of energy and with complete dedication, it was a very generous performance. They were strong both individually and as a unit, however I would expect dancers of this calibre to be perfectly unified, so at times I got a sense of them being either under rehearsed, or a little jet-lagged.

The choreography (created in collaboration with Jutta Hell and Dieter Baumann of the Rubato Dance Company in Berlin), while pleasant and accomplished, was not necessarily anything new. For lovers of pure dance, it was pretty and entertaining, although not what international audiences would call ‘groundbreaking’, as boasted by the publicity.

The themes of the work, ‘new versus old, individuality versus conformity and east versus west’ could have been explored in greater depth. I tend to recoil slightly at the phrase ‘east meets west’, simply because I’ve heard it so many times. Unfortunately, just as I’d feared, nothing new was delivered on this theme.

Jin Xing, in full traditional costume (the same one she was being dressed in in the video preamble), made an entrance at the end of the performance. I would have liked to have seen her dance more, especially as she has been referred to as “probably the world’s best dancer”*, but her presence was certainly electric.

It is always interesting to see what’s coming out of a country that was oppressed, in every way, for so long. It’s also a privilege to see China’s first independent dance group. Xing, recognised as ‘the most significant choreographer in China’ has been doing wonderful things for the art form in her home country, including establishing China’s first modern dance group, the Beijing Dance Ensemble in 1996 and the Shanghai Dance Festival in 2006.