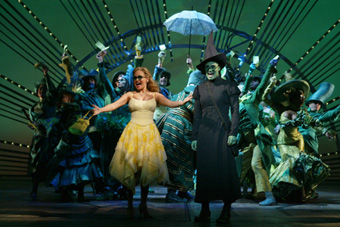 Australia’s favourite musical is about to reveal a new star. In March, Wicked will welcome Elisa Colla for her professional debut in the role of Nessarose, sister of Elphaba.

Only 21 years of age, Elisa graduated from the Australian Institute of Music (AIM) in 2009 and is thrilled to be cast in the role of Nessarose. While at AIM she appeared in the musicals Promises, Promises and Dusty: The Original Pop Diva, and her previous musical credits include Grease, Oklahoma! and Thoroughly Modern Millie.

Elisa said, “I feel so lucky to be cast in this extraordinary show as my first professional musical. It is so magical! I can’t wait to slip into Nessarose’s costume and be a part of this glorious production.”

Penny McNamee, who has played Nessarose for more than 18 months since Wicked first opened in Melbourne in July 2008, is leaving the show to return to work in film and television. After performing Nessarose in almost 650 shows and winning a Green Room Award as Best Supporting Actress in a Musical, Penny says she is going to miss her Wicked family. “I’m taking away such wonderful friendships from this show,” she said.

W icked Australia Co-Producer John Frost is delighted to welcome Elisa to the cast. “Elisa is a wonderfully talented young performer with a brilliant future. We conducted some of the most extensive auditions ever undertaken in Australia to find the best performers for Wicked, and we were lucky enough to find Elise right under our noses in Sydney. She will make a beautiful new Nessarose. I sincerely thank Penny for her significant contribution to making Wicked such a unique cultural phenomenon in Melbourne and now in Sydney.”

Wicked has won 26 major awards including three Tony Awards®, a Grammy® Award and six Helpmann Awards® including Best Musical. Single tickets to Wicked are now onsale until March 14. Bookings at 1300 723 038, www.wickedthemusical.com.au  or www.ticketmaster.com.au