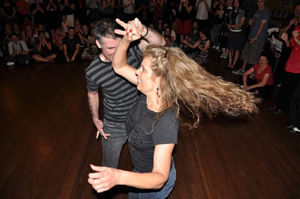 If you’re attempting to achieve the greatest number of dance spins per minute there are certain types of food you should try to avoid. According to Heidi Serlerno, jellybeans, beer and basically any sugary substance are a regrettable choice.

It was last month in Brisbane during the Balboa on the River swing dance festival that Heidi and her partner, Steve Garrett, decided to see how many balboa turns they could complete in 60 seconds. Before the evening the record stood at 113 spins, a daunting and stomach wrenching figure that they’d only ever contested once before.

“We actually beat the record this time last year” said Steve. “The only problem was there was no official media crew present to verify that the record had been broken”.

Ensuring the same thing wouldn’t happen again, organizers called up local community radio station, 4ZzZ, to cover the event and announce on the airwaves that a record had been broken.

After two failed attempts, each clocking in with 99 spins, the third and final go saw Heidi and Steve complete 116 turns, officially earning them selves a place in the Guinness Book of Records. 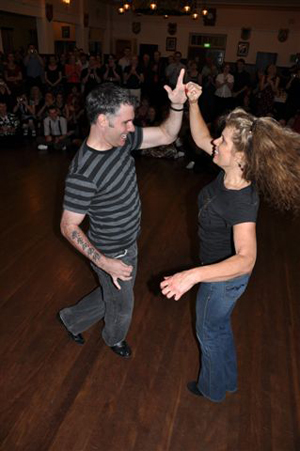 Heidi Serlerno and Steve Garrett Spin into the Record Books

Ecstatic from the victory, Heidi later admitted she didn’t stay true to her own words of advice.

“I decided to have dinner and try some of the German beer they had on offer at the club”, Heidi revealed. I know this is bad but hey, this leaves room to improve for next year”.

Hosted in Woolloongabba at the renowned German Club by Swing Dance Brisbane, the record-breaking attempt was just one of the many events held throughout the festival. This was the fifth year Balboa on the River has taken place in Brisbane. In the years prior the festival was named Balboa on the Rocks and hosted in Sydney.

Swing Dance Brisbane has played an integral part in the resurgence of Balboa in Australia. Partners Mark Paroz and Vicki Lawrance run Swing Dance Brisbane and are very passionate about the dance. They host weekly classes and travel regularly to teach the style.

Balboa combines the fun and energy of dances like the jitterbug with a close, upright style. Born in California just before World War Two, it was first introduced to Australia in the late 1940s by a couple called Hal and Betty Takier.