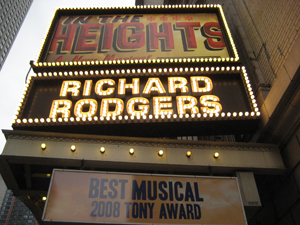 The buzz and excitement of New York city is contagious! Museums to explore, restaurants to enjoy, retail therapy, dance classes that challenge and inspire, and of course a huge selection of amazing Broadway shows. It is impossible to see only one! 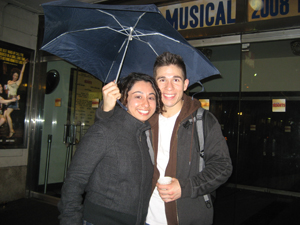 Now in its second year on Broadway, In The Heights is an original show conceived by Lin-Manuel Miranda in his sophomore year at university. Similar to the musical Rent which is based on the experiences of creator Jonathan Larson, Lin-Manuel has taken his experience of growing up as a child of immigrant parents in Washington Heights, and brought it to life in a vibrant contemporary musical.

I was first aware of In The Heights when watching the 2008 Tony Awards where it swept up a remarkable four Tony’s for Best Choreography, Orchestrations, Score and the coveted Best Musical! With high expectations, I purchased my tickets to see what all the hype was about.

In The Heights is a heartfelt story of the importance of family, relationships, community and discovering where you belong. In this multi-narrative, set in the neighbourhood of Washington Heights, we follow the story of Usnavi, a young immigrant from the Dominican Republic. He longs to return home for a better life, but is torn by his responsibilities in Washington Heights, a community that has now become his family. Usnavi explodes on stage telling his story through poetry. This sets the scene of what’s to come. A fusion of spoken word and rap amidst powerful emotion driven ballads, transport you into the heartbeat of the neighbourhood. 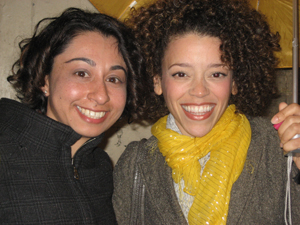 The story is brought to life through the edgy choreography of Andy Blankenbuehler which showcases a talented cast of dancers who break dance and bust out high energy hip hop routines. The explosion of hip hop with a Latino flavor on the Broadway stage is a new era for musical theatre.

An initiative in the Broadway community is Kids Night On Broadway, where young people can see a show for free when accompanied by an adult. It was inspiring to see the cast of In The Heights recognising this program in their encore, thanking all the patrons who attended that night by spending additional time signing autographs after the performance. It demonstrates the dedication of the Broadway community to embrace and appeal to the next generation of theatre goers, which is definitely what In The Heights successfully achieves.

With so many musicals on Broadway vying for attention, In the Heights certainly delivers with a refreshing combination of ‘song and dance’. It is a highly energetic and entertaining show that connects with the younger generation. It left me feeling excited about the future of musical theatre.

For more information go to www.intheheightsthemusical.com