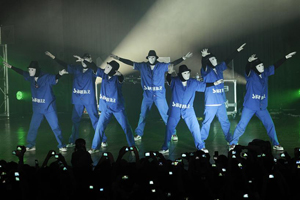 As an avid fan of the hit MTV television show America’s Best Dance Crew, I was excited to see Series One champions, the Jabbawockeez, in action! On Saturday 29th of August, Sydneysiders queued outside The Forum in the Entertainment Quarter at Fox Studios to catch a rare glimpse of the guys behind the masks: Phi, Chris, Kevin, Ben, Rainen, Joe and Phil.

The hype of such an event soon died down when everyone had to queue outside the venue for hours. With a Hip Hop competition running past schedule, media and guests were expected to wait outside for event participants to exit through the main entrance, before Jabbawockeez fans could enter. The crowd was frustrated and keen to get their money’s worth. Unfortunately this highly anticipated event could have been run more smoothly. 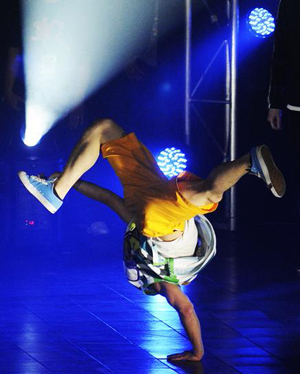 With the show soon underway, it was great to see Sydney based crews performing for the crowd. Crews ‘Justice’ and ‘Deja’ with member Pania Taku from the recent series of So You Think You Can Dance Australia, kept the audience entertained with difficult moves and captivating energy.

Leading up until the Jabbawockeez performance, it would be easy to assume the night was a showcase of past So You Think You Can Dance contestants. Not only was the crowd entertained by series two contestant Pania, but fellow stars Stephen, Timomatic, Chanelle, Danny, Rhiannon and Eman performed a high energy routine with the audience cheering for more. A highlight of the night was a duet by Danny and Chanelle that showcased Chanelle’s incredible flexibility and Danny’s amazing talent.

Although the performance by the Jabbawockeez was delayed, it was definitely worth the wait! With the crew’s cameo in the blockbuster film Step Up 2: The Streets, I was particularly keen to watch their choreography and freestyling in motion. Tributes to Michael Jackson were expected and delivered with a passion and their own unique sense of style. The boys demonstrated their uncanny sense of humour and had great characterisation in their routines. With their slogan ‘A figment of your imagination’, it is evident that their creativity sets them apart from other crews in the industry.