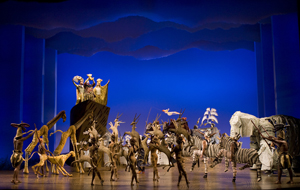 The Lion King is a powerful and emotional production showcasing world class music, staging, costuming and dance. The Broadway phenomenon celebrated its Las Vegas premiere at the Mandalay Bay Theatre in May. A beautiful hotel and theatre, it is a spectacular home for a very special production.

The Lion King is vibrant and stunning with bright African costumes and amazing animal suits. There is a Disney cartoon feel with a sprinkle of that famous Disney magic. Clever costuming, make up, masks and headdresses give each performer the look of their animated movie character, but with a more puppet-like twist. This puppet-look is unique and ingenious. The use of shadow puppets, large puppet lions, birds, zebras, massive elephants and even a bicycle of gazelle is exquisite. The way every animal moves is fascinating and very realistic.

The Lion King is not just a show, but an experience. Radiantly colorful birds fill the sky, and African dancers and animals of every kind move through the aisles and onto the stage. ‘The Circle of Life’ scene, complete with a moving baby lion puppet and Pride Rock corkscrewing out of the stage, is magnificent. It is so real and magical that it brought a tear to my eye. I felt like I was indeed in the African desert experiencing a glorious moment in the animal kingdom.

The vocals are just incredible. The familiar film songs of Elton John join with some new numbers written specifically for the stage show, fused with African rhythms and harmonies. Adult ‘Nala’, played by Kissy Simmons is simply breathtaking. Her powerful African voice sent shivers down my spine. Every cast member, including young ‘Simba’ and ‘Nala’ display beautiful vocals and are commitment to every note and every move.  The large company of very talented, mostly African-American performers is accompanied by a wonderful pit orchestra who add unique African sounds to the music, working with two percussionists on either side of the stage, in full view, that play drums and shakers. 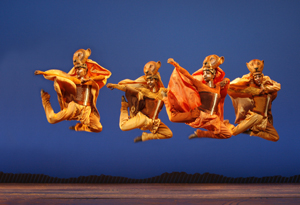 Choreographer Garth Fagan’s work is amazing.  Choreographing a musical where almost every character is an animal must have been no small feat, but the dancing he created is powerful and strong.  The lionesses pounce, prow and move with precision and technique.  Every animal moves convincingly and beautifully, with many displaying very technical dance movements with ease and a fun exuberance. There are many African style high kicks with energy that just oozes from the stage. A dancing scene of hyenas is a treat as the strong male cast take command of the stage with impressive jumps, pirouettes and kicks.

The show is cleverly staged. We enjoy sunrises, beautiful desert skies, the shifting light of dusk, and a magnificent night sky, complete with a vision of ‘Mufasa’ in the stars. Grass grows and moves across the stage, trees overhang, forest plants dance, and layers of wildebeest run towards the audience in a magnificent stampede scene. The stampede scene is just brilliant! You have to see it to believe it.

Although both young ‘Simba’ and ‘Nala’ are incredibly cute and ‘Timon’ and ‘Pumbaa’ are very humorous, my favourite character is that of ‘Rafiki’, played by South African native Buyi Zama. The recipient of a Helpmann Award for her role in the musical, she staggers around the stage making amazing African noises and belting out beautiful melodies. Once a back up artist for Whitney Houston, her pure African voice is just stunning and her character is quirky and loveable.

For those who love the animated film, The Lion King musical takes the story to another level, adding the magic that only the theatre can bring.  No wonder The Lion King is such a stage success that the show at Mandalay Bay joins seven other companies of the production currently running all over the world. Director and Creator Julie Taymor is a genius!