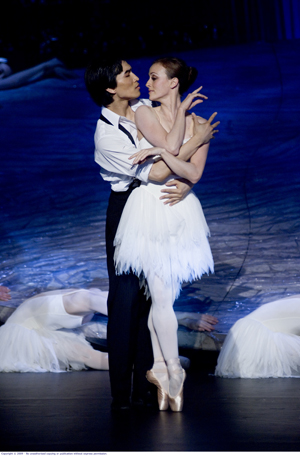 A review of the film – Mao’s Last Dancer.

As I waited outside the Roadshow Theatrette in Sydney on Wednesday 9th September, I had high expectations of the film adaptation of Mao’s Last Dancer. Having read Li Cunxin’s memoir years ago I was blown away by this dancer’s journey from utmost poverty in Mao’s Communist China to stage lights and ballet premieres.

Filmed in Sydney, Mao’s Last Dancer was effective in bridging American and Australian dance culture together. With an all-star cast including Amanda Schull from the movie Centre Stage, it was refreshing to see Australian Ballet great Steven Heathcote cast as one of the main characters in the film. There was also a cameo by Leslie Bell and performances by resident dancers of Sydney Dance Company and the Australian Ballet, performing the choreography of Graeme Murphy and Janet Vernon.

The director’s choice to jump from the past to present throughout the film was highly effective in creating a personal reflection and observing the obstacles Li Cunxin endured throughout his journey. However the use of scenery for the film proved to be least effective in terms of acknowledging which stage of the journey was being portrayed. As much as I am an avid fan of the Sydney Dance Company studios, identifying this as the rehearsal space for the Houston Ballet became a source of confusion rather than an accurate portrayal, whilst one of Sydney’s most popular streets cast as a suburban street in Houston caused the audience to erupt in laughter.

Chi Cao’s amazing technical and performance ability was by far the most enjoyable part of the movie to watch. His portrayal of Adult Li highlighted the artistry that is required of great dancers. Having trained at the Beijing Dance Academy and Royal Ballet School, Cao often leads the Birmingham Royal Ballet through the classical repertory.

Chengwu Guo, as teenage Li, played an integral role in the film in allowing the audience to understand the hardships and obstacles a dancer endured under the conditions of the Beijing Dance Academy. As a graduate of the company and now a member of the Australian Ballet, Guo was an excellent choice for a role within the film.

Mao’s Last Dancer is currently showing through Village Roadshow, Hoyts and other independent cinemas including Palace and Dendy theatres. With its successful premiere at the prestigious Toronto International Film Festival and four subsequent gala premieres throughout Australia, the international release is still a work-in-progress.

To accompany the movie Li has now written three new chapters for the film tie-in edition of the book Mao’s Last Dancer. The new chapters will bring readers up to date on the important people in his life, and detail the story of how the film came about.  It’s sure to be a must read!

To find out more about the movie or Li Cunxin visit www.maoslastdancer.com or  www.licunxin.com