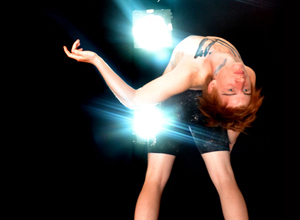 Just when I thought Vertical Shadows couldn’t impress me anymore, they present a theatrical triple experience aptly titled Release The Stars.  Choreographer and Director Stephen Agisilaou has a talent so huge and a troupe of dancers so capable that anything less than a worldwide audience now seems inadequate.

The first piece of the program began before the audience had even taken their seats.  A handful of the company’s dancers were freestyling to the glorious sounds of The Hours soundtrack, composed by Philip Glass.  As we settled in, the dancing organically took shape and so began Fox Times, a compelling and moving piece that was almost classical in its style.  Fox Times highlighted the talents of Jayden Hicks and Rachael Ireson.  Hicks has a natural facility rarely seen in male dancers and an intuitive way of moving.  Agisilaou’s choreography suits his strong technique and expressive style.  Ireson has been a highlight of many local performances and is a stand out in any ensemble piece.  With doll-like features and stunning line, she moves with grace and strength, ensuring that the audience is drawn to her performance.  Even when standing still, Ireson is captivating.  Comprising of a mixture of cinematic scores including the aforementioned Glass piece as well as tracks from the Single Man soundtrack, Fox Times was an inspiring work that made hair stand on end and jaws drop.

In contrast, Grow Up And Blow Away is a jazz style piece that commences with six female dancers adorned in old school glamour miming the lyrics to a song of the same name.  This section seemed a little slow but ultimately worked as a good introduction to the piece and helped the audience adjust to the colour and lightness of the second act.  One of the wonderful things about Agisilaou’s work is his attention to detail and the amount of thought that seems to go into every movement.  During the mime sequence, the dancers were wearing vertigo-inducing heels which they removed before the piece kicked into full gear.  Normally something such as removing shoes would be entirely mundane and most likely gratuitous, however, in Agisilaou’s hands, even a simple act such as that is done deliberately and with flair.  The highlight of Grow Up And Blow Away was undoubtedly the lead dancer, Hayley Uberti.  She flirted with the audience, slithered with sexual allure, and seduced us all.

In closing, we had the title piece, Release The Stars which was all Hollywood glamour and bright lights.  Most exciting of all was the appearance of Agisilaou himself on stage flanked by six other dancers.  With the men wearing black tie and the women in ball gowns, Agisilaou’s choreography managed to transcend what is normally considered a restricting environment and constricting outfits. The movements were grand and elongated, and almost regal while maintaining a modernity and freshness.  Agisilaou is an exceptional dancer who moves as though he is floating.  Granted, a choreographer’s work often looks most at home on his own body, however it was obvious that Agisilaou’s talent lies beyond his ability to create.

As always, with Release The Stars, Vertical Shadows have shown that they are a tour de force in the Australian dance scene.  And, as always, I look forward to their next production.