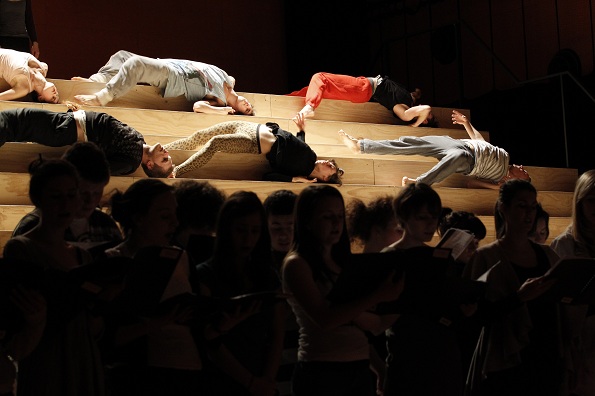 Chunky Move’s Assembly is Artistic Director Gideon Obarzanek’s final work with the company. Produced in collaboration with the Victorian Opera, it is in one a study in the motion of crowds, a salute to the collaborative possibilities of the age-old partnership between music and dance, and a swan song for Obarzanek which marks the end of a triumphant fifteen-year era in the history of Victorian contemporary dance.

The scale of the work reflected the occasion, featuring over sixty singers and dancers performing on a giant staircase set up on the stage of the Melbourne Recital Centre. The choice of music accompanying this experiment appeared surprising. Rather than a contemporary soundscape, Assembly offered its audience a selection of unaccompanied vocal works from the plainchant of the Middle Ages to the music of late Renaissance composers Carlo Gesualdo and Tomas Luis de Victoria. The choice reflected Obarzanek’s desire to work with nothing but pure vocal sound and movement, devoid of technical special effects or wizardry.

Opening on a staircase filled with performers, the crowd launched into a million discussions, creating a wall of sound above which no individual conversations could be heard. This is the anonymity of the crowd, at once comforting and frustrating. The performers underwent a number of subsequent permutations, from navigating past each other’s bodies like pedestrians to performing simply movements in unison.

Whilst these sequences were interesting in their own right, they did not ultimately transcend their original context. There is a fine line between art through emulation and simple imitation; at times, the crowd sequences appeared to veer towards the latter, with rather literal presentations of a football shouting match, dozens of individuals talking at once, moving past each other as if walking on the street. Indeed, part of the magic of crowds is their spontaneity; the reason why people-watching can be so fascinating. Simply transferring such experiences to the stage stripped these moments of their interest whilst offering little as replacement.

The length of the opening also foreshadowed what would prove to be the generally static pace of this work. Lacking a sense of progression towards any sort of climax, Assembly remained somewhat cold and abstracted throughout on more than one occasion, causing one to wonder where it was all leading.

Performers Harriet Ritchie and Sara Black were, as always it seems, standouts – dynamic agents amidst the throng of performers, throwing themselves across the merciless staircase with abandon whilst maintaining masterful control of their bodies. As an ensemble, the dancers impressed with their dynamism and commitment to the work. The singers were equally impressive in their vocal clarity, their voice projecting beautifully across the auditorium amidst the sounds of movement onstage.

The most interesting sequence was that in which the crowd followed individual performers to the furthest points of the set, flocking like sheep to engulf those who dared stand out. The music echoed this theme at many points in the work with a single voice piercing the auditorium before being subsumed by other voices in a beautiful wall of sound. These aspects perhaps lit a path towards a more transformative approach to crowd behavior.

Whilst this was not Chunky Move’s strongest work of recent years, the risk-taking, collaborative approach of Assembly makes it a fitting tribute to Obarzanek; a contemporary dance icon who has consistently stayed one step ahead of the crowd.