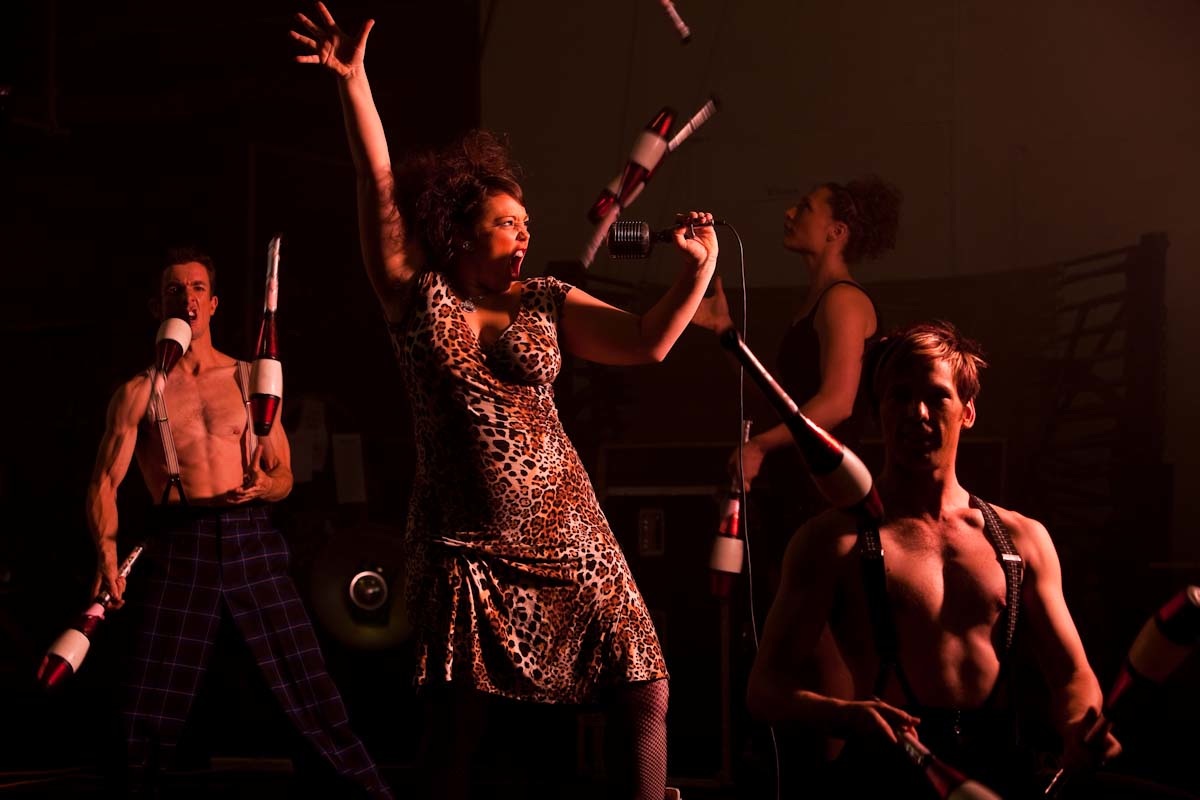 The “other” Spiegeltent played host to the reprise of The Blue Show created and performed by Circus Oz.  First appearing ten years ago on a much larger scale, the show was almost stripped bare in the intimate space of the Melba Spiegeltent, yet the performance lost none if its power.

Thursday night in Melbourne was torrentially wet, windy, and by the time the show started at 9pm, dark.  The tent was erected on the waterfront of the Docklands – a barren wasteland except during the bright day time of summer – so on this night, the glow of lights pouring from the Melba Spiegeltent and the sounds of voices drifting out onto the streets of the desolate docks brought much needed life to the surroundings.

While I took a seat at one of the booths, drink in hand, I noticed the performers were already weaving through the audience, making us feel part of the performance. It was easy to see early on that The Blue Show was a production for adults – no clown jokes or well trained animals here.  There was nudity, swearing a-plenty, provocative costumes and debauchery galore.  Circus Oz steamed up the Melba Spiegeltent and gave the soggy audience something to help them dry off. 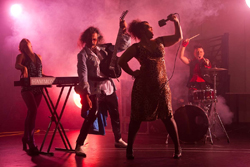 The beauty of Circus Oz is their ability to put on a complete show so entertaining, amusing, clever, witty, and engaging that you almost overlook the fact that the performers are conducting tricks of great strength, skill or dare.  A pole ran from the ground to the ceiling in the middle of the tent and was surrounded by the audience in extremely close proximity.  While the performers spun and dangled from the wobbly pole (I may have stopped breathing during this part, convinced the pole was going to detach itself from the tent’s ceiling) the upturned faces of the crowd showed equal mixes of delight and terror.

The compare declared “it is all real, except for the bits that aren’t”.  Both my companion and I would have done well to listen to such a warning to save us the panic that ensued when we saw a pregnant performer swing and spin around the space from a great height.  We were further horrified to see her taking swigs of a ‘Stolly’ and sneaking drags of a cigarette.  Fortunately, it turned out to be the glorious Flip Kammerer padded up and in character, accompanied by the equally hilarious Jeremy Davies who was the perfect ‘ocker’ bloke.  It was their coupling and brilliant ad-libbing that stole the show.  With spot-on comical timing, not to mention their skill and strength as performers, they were an absolute joy to watch.

Circus Oz hasn’t forgotten its roots, closing the performance with a politically charged song that incorporated themes of greed and change with placards bluntly stating things like “if we don’t change, they won’t change”.  But instead of beating us over the head with the message, Circus Oz distracted us with an impressive balancing act, a catchy melody, uplifting lyrics and the goosebump inducing atmosphere of a message delivered with passion and seductiveness.

The performance drew laughs and cheers at every turn. The Blue Show turned the mundane into the extraordinary, the tedious into the hilarious, and along the way, circus became sexy. We loved every moment of it.

“Feast your eyes. Smell the danger. Taste the sweat.”